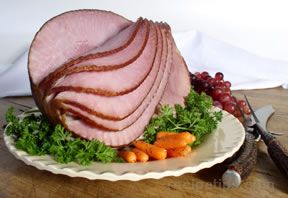 Provided By
RecipeTips
Our free ham recipes are perfect for an Easter ham dinner or any day of the year. The recipes for ham will help you with ham cooking times and temperatures.

Browse our information on how to bake and carve a ham located in our ham cooking guide. We have everything you need to make your ham recipes perfect everytime.
Share this!

Honey Mustard Ham in the Crockpot

Comment By RecipeTips
"This collection provides you with recipes for preparing glazes to give an irresistible finish to your ham, plus soups and sandwiches that will suit your taste. We also have many tasty recipes for your leftover ham. Whether you need a dish for breakfast, lunch, or dinner, you can find it here.

In addition to this recipe collection we have cooking tips and advice on preparing several different varieties of ham. You will find tips and advice on everything from what type of ham and how much to purchase, to the proper way to store it. We have step-by-step instructions on: preparing different types of ham, different cooking methods, and how to carve a whole, half, and spiral cut ham. Let us help you prepare the perfect ham for any special occasion."

Comment By Davey Hiltz
"What would you think of a maple ham? I don't see a recipe on there but I think I could try to use the pineapple recipe but tweak it a bit. It's family tradition for each of the kids each year to make something unique and I've thought that maple would be a nice touch for a ham."

Reviewed By MamaOf3
"Great ham recipes for cooking the ham and also for using the leftovers. Can't wait to try a couple of them."

Reviewed By bam
"cook2cook, I have made several of them. The Honey Glazed Spiral Ham is delicious, the Slow Cooker Ham was good and super simple, and the glaze on the Baked Ham with Apricot Brandy Glaze is great. You can't go wrong with any of these."

Reviewed By cook2cook
"Yum, looks like some great recipes. I can't wait to try a couple. Has anyone tried any of these to know some good ones to try?"

Comment By gigs
"I am supposed to find a good ham recipe for my wife to fix for Christmas eve. My folks and a few others will be at our house so she wants something easy but good to serve. I am going for the Timberwind Ham recipe. It looks good enough to take a big bite right now. It sound pretty easy and the glaze sounds awesome. I will print it out and see if my wife agrees!"

Comment By GabriELLA
"KiyLynn, yes, I did fix this for Thanksgiving. It was great. I served the extra glaze with the ham too and that was really good with it. I would definitely recommend it."

Comment By KiyLynn
"Hey Gabriella, did you ever try the Apricot Brandy Glazed ham? I need to fix a ham next weekend and I thought that really looked good. Just thought I would see what you thought of it."

Comment By killermom
"I like seeing a group of recipes like this because it eliminates having to go to each one individually. At least here you can see a picture of it and read a little description of each one before going to the actual ham recipe."

Comment By bberg
"We got a free ham from the butcher when we took our cattle into the locker. I am going to fix it for Christmas Eve when all my family will be here so I wanted a simple recipe. I found this collection and now I can't decide which to try. I am leaning towards the Timberwind Ham recipe because it stated that it was a no-fuss way to prepare a ham . . . just what I am looking for. Hope it turns out as yummy as the recipe looks."

Comment By HeyDude
"I have put off getting a turkey for too long so I won't have time to thaw it now for Thanksgiving. I think I am just going to cook a ham. Probably use the crockpot recipe. It sounds simple. My girlfriend likes ham better anyway. She can worry about what we have with it. Thanks for the ham recipes!"

Comment By Haley
"My in-laws will be here to stay with us this weekend and I am going to fix a ham (my father-in-law's favorite). I usually just bake it but thought I would try something a little different. These ham recipes all look pretty good but I think I am going to try the Timberwind recipe. The glaze for this ham recipe sounds awesome. I hope they like it."

Comment By ToBeOrNotToBe
"I agree with GabriELLA. That Baked Ham with Apricot Brandy Glaze recipe looks awesome! That glaze looks delicious. I will definitely be trying this recipe."

Comment By GabriELLA
"We decided on having ham for Thanksgiving this year since we will be having turkey the Sunday before at my mother-in-law's. I am starting to look for recipes and came across these ham recipes. The Baked Ham with Apricot Brandy Glaze recipe looks interesting. I will have to print that one and keep it as a possibility."

Comment By gigs
"I won a ham at work last February and it is still in the freezer so I thought it was time to get it cooked. These ham recipes give me lots of options but of course I am going to go for the one that looks like it is the easiest. I think I will try the Glazed Pineapple Baked Ham . . . doesn't look too difficult and I like ham and pineapple together."

Comment By Gama
"Great collection of ham recipes! I was looking for a different way to fix my Easter ham this year and found this collection. It has given me some good ideas to use when preparing my ham rather than just plain old baking it."
Follow Us!