Print
A group of sugars produced from sugar cane and categorized by the amount of refining that has occurred to process and purify the sugar. Brown Sugars are produced either as raw sugars immediately after the raw cane juice is extracted or they are produced after the juice has been extracted and sent through a refining process. The Brown Sugar produced from the raw juice creates varieties of molasses, treacle, sugar syrups, demerara sugar, muscovado sugar, and turbinado sugar. The refined sugars produce the most common varieties of Brown Sugar, molasses, syrups, and demerara. Often considered to be the soft sugars or the coated brown sugars, refined sugars are packaged in 1 pound cartons or plastic bags and are readily available in food stores. Refining removes the impurities such as mold, fibers and debris that are not acceptable for most forms of edible sugars.

The most unrefined of the Brown Sugars are the blackstrap molasses, similar to black treacle, which are produced from the residue of the cane refining. Following the blackstrap or treacle are the demerara sugars, an unrefined or raw sugar coated with molasses and processed into crystals or cubes of sugar during the first crystallization of the cane syrup. As a crystal particle its size is larger, the texture is coarser and it is stickier than refined sugar. The size of the crystal and the crunchy texture make demerara a good selection for a topping to be sprinkled on desserts or fruit dishes. It is also often used in beverages such as tea for a sweet flavoring. Demerara is also a partially refined sugar that is lighter brown in color than the unrefined version. When using the refined demerara sugar in baked goods, be aware that it has similar properties of honey, slowing down the reaction with the yeast during the early stages of the dough rising. However, it is a good sugar for use in spiced breads and baked goods, providing an even, light tan coloring and a pleasantly sweet flavor. Another form of demerara is sold in the United Kingdom and referred to as "London Demerara." Like soft Brown Sugar, this sugar is actually a refined white sugar blended with small amounts of molasses.

Muscovado, considered to be the darkest of the raw dark Brown Sugars next to blackstrap, has a fine-grained texture with natural molasses to provide a strong flavor and consistency similar to refined Brown Sugar. Produced during the third crystallization of the cane syrup, muscovado is available as either a dark or light sugar, with the dark variety being somewhat stickier than the light. When determining which type to use, select the one that best suits the color desired for the food to which it is added. Muscovado is also referred to a Barbados sugar, however a Barbados sugar has a finer texture than the muscovado.

Turbinado sugar, which is refined slightly more than demerara, is a raw sugar cleaned by a steam process to remove contaminants in order to make it an edible product. It has coarse, pale ivory colored crystals that have a mild flavor resembling a milder version of molasses. Turbinado can be substituted for demerara.

Soft sugars which are also known as coated Brown Sugars are the types of dark sugar most often sought in food stores for baking purposes. This type of Brown Sugar, available as a soft, granulated or liquid form of brown sugar, is basically a refined white sugar or sugar syrup with molasses added in varying amounts to produce a darker colored and stronger tasting sugar. The various colors (light to dark) of this sugar will contain from 1% to 4% cane syrup that has not been refined out of the sugar contents. The lighter the color of the Brown Sugar, the less syrup contained in the sugar. Thus, the ligher colored sugars will have a texture that is more granular and less moist. The flavor of the lighter colored sugars will not be as complex as the darker colored surgars and will be sweeter tasting. As a rule, the lighter the color, the less intense the molasses flavor in the sugar. However, lighter or darker soft Brown Sugars can be substituted for each other as long as the recipe does not require more than 1/4 cup of sugar. When larger amounts are required, the flavor and moistness of the food being prepared may be altered more than desired. Soft Brown Sugar is available in light and dark varieties, with different intensities of darkness being provided by different manufacturers.

Since the soft Brown Sugars have a tendency to become lumpy as moisture accumulates over time in the sugar granules, it is best to store the sugar in airtight containers, such as a jar (plastic or glass) or a durable plastic bag. To soften Brown Sugar that has hardened, moisture can be added by any of the following methods: 1)Place sugar in a bowl and either place a damp cloth directly on the sugar or on a piece of aluminum foil that is placed on the sugar and allow it to remain for several hours; 2)Place the sugar in a plastic bag and add an apple wedge and allow it to remain in the bag for a day or two until the sugar softens; or 3)Use a blender or food processor to soften. Brown Sugar can also be heated to soften by placing it on a stove in a pan or in a microwave safe bowl in the mircowave, but if heat is applied use caution so the heat does not melt the sugar. As another option, a small clay disk is often used as a moisturizer to keep the sugar soft. Known as a Brown Sugar Softener, the clay is soaked with water by placing it in a bowl of water for 15 to 30 minutes. The disk is then towel dried so it is not dripping water and then placed in the middle of the Brown Sugar contents. Months later when the sugar begins to harden repeat the process of soaking the disk.

Brown Sugar can be substituted for white sugar, resulting in a more moist baked good providing a flavor with a hint of butterscotch. It is not advisable to substitute liquid or granulated brown sugar for soft Brown Sugar, since the moisture content of soft brown sugar is higher, providing a different texture in the baked goods than can be achieved using other types of Brown Sugar. When a recipe requires Brown Sugar, always use soft Brown Sugar and when measuring, always pack it down firmly in the measuring cup. 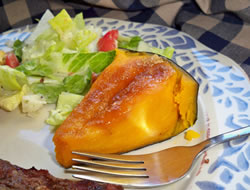 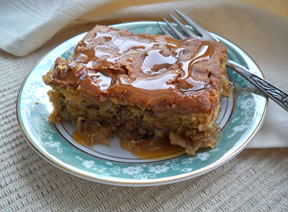 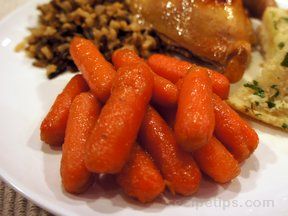 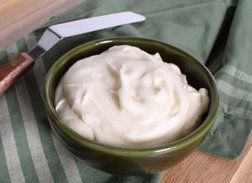 how to test stages of sugar 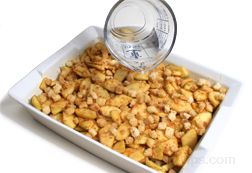 how to make apple brown betty 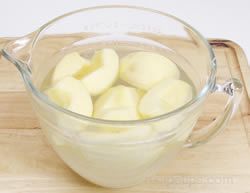