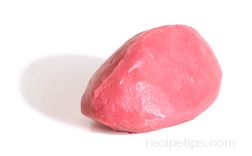 Print
Traditionally, this term refers to a delicate dumpling made with ingredients of ground or minced meat, poultry, fish or vegetables, which has been seasoned and bound with a paste made with the use of breadcrumbs, eggs, egg yolks, fat, flour, rice or cream. The paste is referred to as a panade or panada. The dumpling is formed into an oval shape with the use of two spoons to mold the mixture. It is then poached in stock or water. The Quenelle can then be used as a first course, main course, or as a garnish and is generally served with a rich sauce.

As times have changed and the term has been applied to additional foods, the Quenelle has become a word associated with a shape, not an ingredient. The shape is formed into an smooth oval similar to a football or a three-sided eliptical shape that is used to make a pleasing presentation for the semi-soft foods being served. This shape is achieved with the use of two spoons of the same size that are held in each hand so the bowls of the spoons face and are positioned next to each other. The first spoon scoops out a spoonful of the food being molded and as it does, this forms the first side of the Quenelle as it is held in the bowl of the spoon. The bowl of the second spoon is then pressed against one side of the scooped contents that are being held in the first spoon in order to start the process of forming the second side, creating a ridge running from the tip of the spoon to the handle. Since the first side was formed as the first spoon scooped out the original scoop of food, it is now time to rotate the first side that was formed as it is being held in the first spoon. This is done so the spoons can remain facing each other, making it easier to form the third side. Therefore, as the second spoon presses down and against the contents held by the first spoon while forming the second side of the Quenelle, slide the spoon down and into the first spoon to remove the contents. The third side is then easily formed using the first spoon. When the desired look has been achieved, the food is ready to be placed on a plate for serving.

The semi-soft to semi-firm textures of the foods make them easy to shape into a smooth oval. Foods often served with a Quenelle shape include ice cream or sorbet desserts, rice, mashed potatoes, soft cheese, mixed vegetables, and ground or minced meats. The size of the Quenelle is dependent on the serving size, so the individual servings of potatoes or desserts may typically be much larger than the individual servings of cheese, unless the serving is to be created for more than one person. Thus, smaller spoons may be used to mold the shape if the serving size is to be smaller in dimension.