Print
A plant belonging to the parsley family that is a common vegetable grown primarily for the pale green stalks or Celery ribs as they are also known. Celery is basically available in three different varieties which include the Celery root, Celery stalks or ribs and cutting Celery.

Round in shape and rough in apperance, the Celery root begins to grow under the surface of the ground as a tuber with numerous thin stalks sprouting upward out of the root. The stalks have the same appearance as Celery stalks but are much smaller in width height, and thickness. The root, which is also referred to as celeriac, contains a white, semi-firm flesh that is often served as a cooked vegetable.

Cultivated Celery stalks are grown from the Clery plant that produces long, slender green stalks that emerge from the smaller root or tuber than forms as the vegetable known as Celery root. Celery stalks form a thick base at the bottom and grow into solid stalks that are topped with larger green leaves than the Celery root. The stalks can be eaten raw or can be cooked in dishes such as soups, stews, stocks, and entrees. The darker green Celery stalks are referred to as unblanched Celery stalks while the light green variety is known as blanched Celery. Wild Celery is another type of Celery that can be harvested. The stalks of the wild Celery are thin textured and hollow from the bottom to the top of the stalk. A hybrid variety is produced that is a cross between the wild and the cultivated Celery which also is hollow in the center but has a more intense celery flavor and firm texture.

Cutting Celery, which looks very much like parsely with its small flat leaf, is a variety most often used for soups and stews. Although the larger Celery stalks are also commonly added to soups or stews, cutting Celery has a very thin and very narrow stalk that develops and strong Celery flavor that enhances the flavor of foods to which it is added. Similar in appearance and size to wild celery, cutting celery does not grow from a Celery root like a celeriac and therefore does not develop a tuber as its base. Celery is often used to add considerable flavor and texture to many recipes. 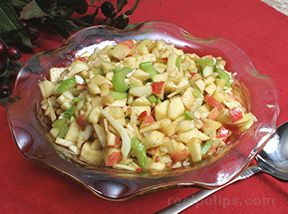