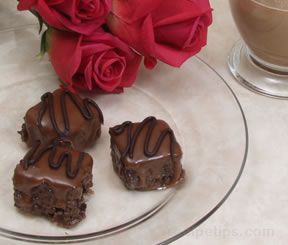 Valentine's Day has evolved not only as a celebration for adults, but also for children. There are many fun recipes for kids, such as frosted heart-shaped sugar cookies. We have Valentine Day ideas that include food, gifts, and activities for this special day.

History of Valentine's Day: Although observed worldwide on February 14th, the history of Valentines Day is a mystery. Widely believed is the legend of Saint Valentine, a priest who served under Emperor Claudius II during the third century of ancient Rome. The Emperor Claudius II outlawed marriage for young men whom he saw as potential soldiers. He feared that young married men were not as willing soldiers as single young men. Defiant, Saint Valentine continued to perform secret marriages for young couples in love. When Claudius discovered what Saint Valentine had been doing, he ordered him to death. While awaiting his death, Valentine fell in love with a young jailor's daughter. Prior to his death, Saint Valentine wrote this young woman a letter in which he signed "from your Valentine." Valentine was allegedly put to death on February 14th. Legend or not, this romantic heroine has been immortalized by the exchanging of cards and tokens of affection for many centuries.

Gathering with Friends and Family

A Tradition with Meaning

It is traditional to give roses to loved ones on Valentines Day. All roses symbolize love, but certain colors take on special meanings.

Air drying is a simple way to preserve your roses. Preferably, roses that are just beginning to open, but still have a shape work best. Hang the bouquet upside down with a piece of string in a clean, dry area for up to 2 weeks.

Once the roses have dried, create a swag by tying the dried bunch with a ribbon. You could also make potpourri by placing the dried rose petals and leaves in a decorative bowl and adding scented oil.

To crystallize your rose petals, place rose petals on a metal rack. Brush the petals with egg whites, then sprinkle with sugar. Allow 7 to 14 days to dry.

Both crystallized and dried roses petals will make a beautiful handmade topiary or wreath.

Be My Valentine... Reviews

Reviewed By Haley
"Interesting ideas. I like the Wine and Dessert idea. I will have to see if we can get a few couples to join in. Our friends and family all love wine and who doesn't love dessert!"

Reviewed By VBmom
"Great article! Lots of interesting information and tips for Valentine's Day. I think I will do the Valentine hunt for the kids. They will love it."
Halloween Party Recipe Ideas

How To Carve a Pumpkin

How to Roast Pumpkin Seeds

Luck of the Irish

All About Corned Beef and Cabbage

Prepare and Cook Corn on the Cob

How to Freeze Corn on the Cob

How to Prepare Chili Ingredients

How to Boil Eggs for Eating or Decorating

The History of the Kings Cake