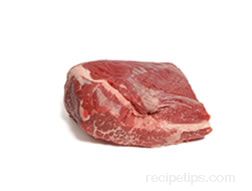 Print
Also referred to as the Deckel or Deckle, this cut is one of two cuts taken from the beef brisket, a piece of meat located between the fore shank and the plate of the beef carcass. Due to the size of the full brisket, which may weight from 8 to 12 pounds, it is often cut into two halves, one of which is sold as a Point Cut (second cut) and the other sold as the Flat Cut (first cut).

The Point Cut, a cut also known as the thick cut, contains significantly more internal fat running throughout the meat as pockets of fat. It is not a cut that is commonly found in many meat markets or food stores because it is not as nicely structured and appearing as other cuts of met. However, it is still a very flavorful cut and can be substituted for the Flat Cut. It is the Flat Cut, which is also referred to as the thin cut or brisket-deckel-off, that is the cut sold in food stores as the brisket cut. It is a leaner and thinner piece of meat than the Point Cut of the Brisket. Despite being more lean the Flat Cut does have a full layer of fat that runs across one surface of the cut, which enables the cut to remain moist and juicy when its cooked. The fat in both of these cuts helps to moisten the meat as the cuts are pot roasted, slow cooked or prepared as a London broil. When purchasing either the Point Cut or the Flat Cut, select or request pieces that have a fair amount of fat to keep the meat moist as it cooks, since some butchers often trim the fat prior to selling the cut. 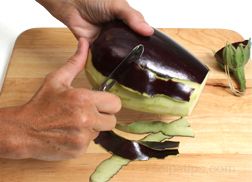 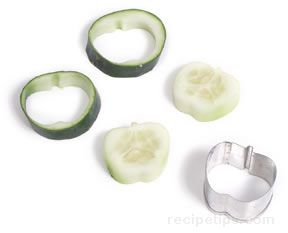