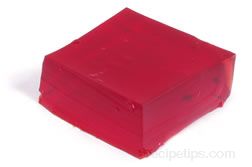 Print
A thickening agent and food item made from pigskins or from beef bones, cartilage, and tendons. It is then processed into an unflavored, transparent protein powder and sold in a powder form, as granules, or as thin sheets which may be referred to as "leaves." Since gelatin is pure protein and since it has unique characteristics as a substance, is has many uses for the manufacturing and preparation of foods. The key characteristic of gelatin that is most important is its ability to "gel" or become solid in its shape. Prior to dissolving gelatin in liquid, it is important to soak it for 4 to 5 minutes in order to allow it to soften, increase in size and make it easier to dissolve as the water temperature increases. As the water becomes warm around this protein and the gelatin particles begin to enlarge, they absorb the water resulting in a mixture that is known as a "sol" where the gelatin substance is energized from the heat and remains freely flowing in a liquid state. Then, as the solution cools the existing energy begins to decrease and the liquid starts to form a "gel" which is the point when the gelatin starts to solidify. However, there is another state that may occur prior to becoming a gel when the substance is not fully solid. If the gelatin is whipped or beaten so air is added prior to the gel hardening, the gelatin becomes a thick, airy, smooth-textured substance. This procedure is used to make foods such as souffles or mousse desserts for which the smooth substance enhances the appearance, flavor and texture of the item being prepared. Further, when gelatin is processed into a frozen state, it forms ice cream and results in a food with a creamy texture.

When making broths, soups, candy, desserts, syrups, sauces, jellies, gravies, meat dishes, and beverages, gelatin is widely used as a thickener. It may also be added as a binding agent for canned meats, cheeses, dairy foods, candy, and meat rolls or a clarifier for beer, juice, wine, and vinegar. When added to chiffons, marshmallows, mousses, nougats, souffles, and whipped cream, gelatin can be used as a whipping agent to improve the textures of the foods being whipped. In a similar manner, gelatin works well as an ingredient in foods that are formed into a shape that needs to be retained for appearance and presentation, such as icings, chiffons, and gelatin salads or desserts.

In the preparation of gelatin desserts or salads, various types of fruit or vegetables are commonly added to the liquid gelatin prior to it becoming thick and jelled. However, some fruits such as figs, fresh and frozen pineapple, guava, gingerroot, or papaya create a reaction that will not allow the gelatin to thicken and gel. Therefore, it is best to use recipes that have ingredients known to work with gelatin if the gelatin is to be combined with another food item. Gelatin may also be referred to as "gelatine."