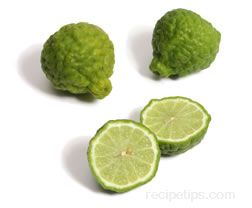 Print
A variety of lime that is small, round and pointed at the end with a gnarled outer skin that emits a sharp lemon-like aroma. The Kaffir lime is not considered to be a direct member of the lime species. Instead it is catagorized as one of the subspecies of citrus fruits that are linked to the lime family. Since the flesh of the Kaffir is not edible, it is the grated peel or leaves most commonly used for foods. The rind and leaves of the lime are used in recipes for curry pastes, soups, fish, shellfish, meat, poultry, vegetables, marinades, and chutneys, adding a distinct citrus smell and flavor.

For use as a seasoning, the rind is kept whole, cut into strips or grated and can be used fresh or in a dried form. The leaves, which are typically torn or chopped into bits to be used for flavoring, are generally found in a dried form but are also available fresh or frozen. Most often available in Asian markets, the kaffir lime can be substituted with domestic citrus leaves or regular lime rind. The Kaffir lime may also be referred to as a Kieffer, Thai or wild lime. 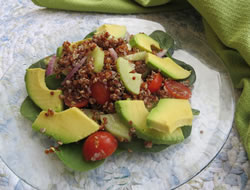