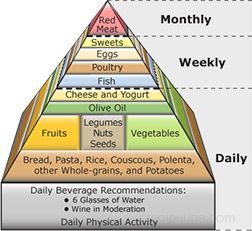 Print
A dietary plan in which a pyramid (in the style of the USDA food guide pyramid) is used to illustrate the types of food and quantities of food that should be consumed to maintain a diet based on the healthful traditional diets of the people who lived in Greece, Crete, and southern Italy during the early 1960's. During that time, it was noted that the incidence of chronic disease in the region was among the lowest in the world and the life expectancy was among the highest in spite of the limited medical resources that were available in those areas at the time. Current scientific research is proving what has been suspected for many years: the Mediterranean diet, in conjunction with daily physical activity, is synonymous with good health.

Although the Mediterranean diet features a greater emphasis on foods obtained from plant sources, the total fat intake is still about the same as the dietary plan illustrated by the traditional USDA food guide pyramid: This is because of the high consumption of olive oil. Most of the fat in olive oil is in the form of heart-healthy monounsaturated fat, which has proven health benefits.

Foods that should be eaten daily are shown in the lower levels of the pyramid while foods that should be consumed less frequently, perhaps weekly or monthly, are shown in the middle and upper levels of the pyramid. It is also interesting to note that moderate wine consumption at mealtime is recommended for adults as part of a healthy diet. Scientific studies have suggested that one or two small glasses of wine (especially red wine) per day may help reduce the risk of cardiovascular problems because of the antioxidants contained in the wine; however, overindulgence will have the opposite effect and may lead to other serious health problems.