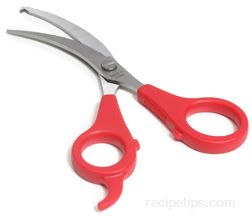 Print
A useful kitchen tool for removing meat from lobster and crab legs and for deveining shrimp. When using the scissors, the first step in removing meat from a lobster is to crack the claws with the serrations located on the inner edges of the handles. Next, use the scissor blades to cut the claw shell and expose the meat. The curved blades also allow the leg meat to be removed largely intact. Cut the underbelly and tail portion of the lobster using the scissor blades. The meat can be successfully removed in one or two pieces. Typically, the tail, which contains the majority of the meat, is broken off the body before the shell is cut and the meat is removed.

When removing meat from king crab legs, the scissor blades are useful for splitting the legs and knuckle, making it an easy task to obtain the meat inside. The unique curved design of the scissor blades minimizes damage to the tender meat.

Deveining shrimp is easily managed with the seafood scissors. The large vein located along the backside, runs the length of the shrimp and is actually the digestive track. The curved design of the scissors conforms to the shape of the body allowing the vein to adhere to the notched end of the scissor blade.

Although other kitchen implements are often used for removing meat from seafood, such as a sharp utility knife or even a regular scissors, the seafood scissors is an all-in-one tool to make the job easier. Seafood scissors are available in kitchen stores, specialty shops, or well stocked department stores. 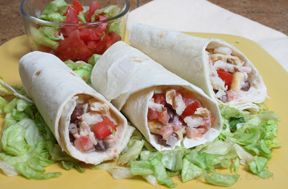