Print
An anadromous fish, which means that this species of fish was born in freshwater, then migrates to saltwater to mature and then returns to freshwater to spawn. Popular to serve as a main dish, Salmon provides a tender, flaky-textured meat with a mild to rich flavor, depending on the species. It is a fish that is rich in omega-3 fatty acids, which help to reduce LDL (bad) cholesterol. Salmon can be prepared in most any manner, such as smoked, baked, broiled, grilled, fried, or poached. Salmon originated in the Atlantic and Pacific Oceans but are now grown in most locations where there is cold, protected seawater.

The Atlantic Salmon is the only species that originated from the Atlantic Ocean. It is mostly farm-raised and sometimes named for the country where it was born, such as Norway and Nova Scotia. Most Atlantic Salmon meat is smoke cured.

There are five species that are commercially available originating in the Pacific Ocean. The Chinook Salmon, a popular species that is commonly smoke cured, is the largest of the Pacific species, growing to over 100 pounds in weight but generally being harvested for market weighing from 15 to 50 pounds. The Coho Salmon, known for its reddish-orange color, is an excellent flavored meat with a flaky texture. The Sockeye Salmon, which has deep red colored meat and the Chum Salmon are generally canned or frozen to be exported. The Pink Salmon is the smallest and one of the most abundant of the Salmon species, averages below 5 pounds in weight. Pink Salmon, which is most often canned for market, is the least expensive due to larger supply and due to the consistency of their meat, which is not as oily or flavorful as other species.

Some Salmon meat is referred to as "white" Salmon. This designation refers to a Salmon that has had been born with a genetic difference resulting in a deficiency of their pink pigmentation resulting in a meat that is all white or a combination of white and pink. When the meat of the Salmon is both white and pink in color, the fish may be referred to as marbled or creamsicle meat. Although there is no nutritional difference, the more white meat existing on the filet or steak, the milder the flavor.

The flavor and the texture of Salmon varies according to species, the time of year the Salmon was caught, and the area in which the Salmon was raised. If the Salmon was raised in the wild, the color will be a brighter or more rosy pink than a farm raised Salmon. Wild Salmon most often have a more delicate flavor that is rich and buttery tasting. Although the wild Salmon will typically contain more oil than farm raised Salmon, the fish is more full flavored than farmed Salmon which will have a tendency to provide a more "fishy" or "fatty" flavor. Organic Salmon is a term used to describe a farm raised Salmon that meets standards or requirements established by firms in the Salmon industry in coordination with government agencies such as the USDA (United States Department of Agriculture). Some of the key standards for Organic Salmon include: 1)No use of antibiotics, hormones or appetite stimulants; 2)Lower stocking densities in the farm rearing ponds where the Salmon are raised so there are fewer fish per pond or area within the pond; 3) Feed restrictions that require the grain and vegetable feed given to the Salmon to be raised as organic and free of additives. 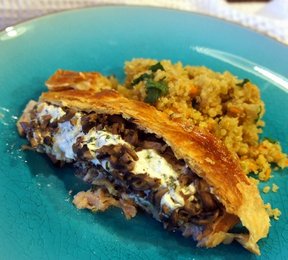