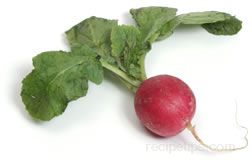 Print
A root vegetable related to the turnip and horseradish family, with a crisp texture and a peppery hot flavor. The hotness of the Radish varies from mild to very strong, depending on the age and type. The different types come in a variety of sizes, shapes, and colors. The most commonly found are the small, round Cherry Belle, the Red Globe or the white carrot shaped variety known as Daikon. Radishes are categroized into two main types so they are labeled as either spring or winter, each determined by their growing season and when they are harvested. Spring Radishes are harvested early in their growing season resulting in a smaller-sized Radish which include the Cherry Belle, Easter Egg, French Breakfast (Flambo), Icicle, Watermelon (Beauty Heart), and Snowball (White Round) Radishes. The winter Radishes grow slowly, are harvested later in their growth and result in a more elongated-shape or a larger and round-shaped vegetable. Winter Radishes include the Chinese, Daikon, and Spanish Black. Red Globe Radishes, which are served as hors d'oeuvres, as complements to salad or sandwiches, or as a garnish, have a peppery hot flavor. The other spring Radishes are somewhat milder and are often enjoyed in foods as an ingredient or as a garnish. The French Breakfast is particularly mild, and thus the reason for its name. Winter Radishes tend to have a milder, more delicate peppery flavor however, the Black Radish can be very pungent. Winter varieties and are often used as a garnish for food dishes such as fish and poultry, sautéed and braised to be served as a vegetable dish, or diced and added to soups and stews. If the pungency of the Radish is too strong, it can be reduced by salting and washing the Radish to draw out the peppery flavor, by steaming the Radish for 5 to 10 minutes, or by baking the Radish with other vegetables.

Radishes are available year round. When selecting, choose Radishes that are firm, crisp, and without blemishes. Radishes grown and harvested when temperatures remain hot, develop an increased bitterness. Store without the leafy tops and place in the refrigerator to keep fresh for four to seven days if they are the spring varieties, or two to four weeks if they are winter Radishes. For the best flavor, serve fresh Radishes within several days of harvesting. The larger varieties, such as the watermelon, are similar to turnips for storing and can be kept longer or stored in a fruit storage area. To increase the crispness of a radish, soak it in ice water for several hours prior to serving. 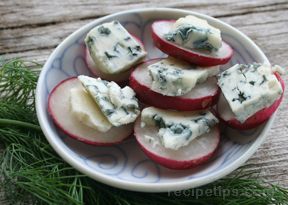 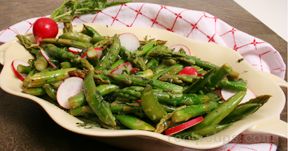 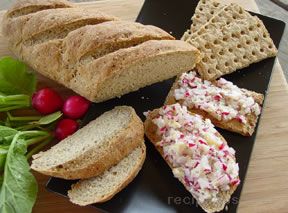