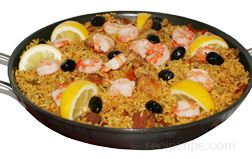 Print
A traditional Spanish one-pan meal made with rice and numerous ingredients including various types of fish, seafood, poultry, sausage, and vegetables. There are many different versions and varieties of paella depending on the region of Spain where the recipe is popular, but the original home of paella is the Valencia area of Spain, where the geography and environment are excellent for cultivating rice. Valencia rice is a medium-grained, plump variety that is able to absorb a large volume of liquid. The grains are slightly sticky when cooked and yet the grains separate easily, which makes it perfect for paella. Other types of Spanish rice, such as Bomba and Bahia, are equally good for preparing paella.

The rice is the most important ingredient in paella, which is why nearly all paella recipes call for Valencia rice or similar short to medium-grain Spanish varieties and caution against using any rice that happens to be on hand (especially long-grain varieties or parboiled rice). Paella is not nearly as good when using substitutions. Other rice varieties, such as Arborio or Carnaroli from Italy and Pearl or Cal Riso from California, can be used if necessary, but only if Spanish varieties are not available.

Paella is known for the dry, separate rice grains of the top layers that are accompanied by a browned crusty layer of rice that forms on the bottom of the pan. This browned layer is known as "socarrat" and is the result of cooking the rice uncovered and unstirred (after the liquid is added), especially when cooking the paella with the traditional method over an outdoor wood burning fire. The amount of browned rice on the bottom of the pan also depends on the recipe: some recipes call for the rice to be stirred, which does not allow the socarrat to form, while other recipes call for only occasional stirring to blend ingredients as they are added to the pan.

The rice and ingredients are traditionally cooked in a paella pan, which is a large shallow skillet approximately 14 to 16 inches in diameter. The shallow pan prevents the rice from steaming and becoming mushy. When using the stovetop, the cooking process is often finished in the oven where the paella bakes, uncovered for approximately 10 to 20 minutes (depending on the recipe). The paella is then allowed to rest, lightly covered, for 10 minutes prior to serving. This allows the rice to continue to slowly cook and prevents the grains form bursting, which would cause the paella to become mushy (which happens if the paella is overcooked on the stove or in the oven).

Paella can be made as a meat dish, an all-vegetable dish, or as a combination of meats and vegetables. The ingredients will often include meats such as chicken, pork, ham, and chorizo sausage; shellfish such as shrimp, lobster, mussels, and clams; and vegetables such as onions, peas, beans, tomatoes, and artichoke hearts. Garlic and saffron are common seasonings in nearly all types of paellas. Lemon wedges, a simple salad, and breads with harder crusts often accompany paella. 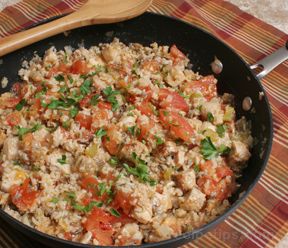