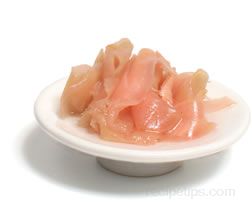 Print
A subtropical plant that is grown for its knobby root, which is used as a seasoning in foods. The root, which is actually a rhizome, has a tan skin and a flesh that may range in color from ivory to light green. It is food seasoning in most regions of the world, but it is especially popular in Asian and Indian dishes.

Ginger is available in a variety of forms which include: fresh, dried (ground), juiced, crystallized (candied), pickled, and preserved. Fresh ginger can be purchased as either young or mature. The young ginger, often referred to as spring ginger, is similar to a young cheese. The aroma and taste are mild, while the outer skin and inner flesh retain a soft tender texture. As the ginger matures the texture hardens, the aroma becomes pungent and the flavor becomes spicy. When sliced, chopped or crushed, fresh ginger is generally used to flavor meat, fish, poultry, and vegetable dishes.

The dried powdered form of ginger is popular in Europe and the United States as a flavoring for salad dressings, baked sweets, soups, curries, meats, and desserts, such as gingerbread and gingersnaps. Ground ginger works well for flavoring a variety of foods, however it should not be substituted for fresh ginger in recipes. It has a flavor that enhances and goes well with cinnamon or nutmeg seasonings. Dried ginger can be kept at room temperature away from heat for 6 to 7 months before it begins to lose its flavor. The spicy aroma of the ginger should always be present and if not, it has lost its earthy flavor.

The juice of ginger is another form that can be used for cooking and baking, making it an easy method to add ginger to foods. In most recipes it can be used instead of fresh or ground ginger, adding it to marinades, grilling sauces, salad dressings, stir-fried foods, meats, fish, poultry, soups, and beverages, such as teas or fruit drinks. Ginger juice can be substituted for ground or powdered ginger. 1 tablespoon of juice equals 1 tablespoon of fresh grated ginger or 1 teaspoon of ground ginger.

Crystallized ginger is a form of ginger that has been chopped into small bits, cooked in a corn syrup and then coated with sugar. It is available as either golden tan colored bits that are dried or red candied bits that are packed in a red-colored, sugar syrup mixture. This candied version is a common form used for meats, poultry, desserts, cookies such as ginger cookies, and sweets. It is also added as an ingredient or as a melted topping for glazes and sweet toppings.

Pickled ginger and preserved ginger are both forms that have been preserved in a brine of either sweet vinegar for the pickled version or sugar and salt for the preserved version. Pickled ginger is often served as an appetizer, while the pink pickled version is a common condiment for Japanese sushi, where it is referred to as gari. Preserved ginger is commonly used as a garnish for meats and fish, as a seasoning for desserts or candy, and as an ingredient in salads, sushi dishes, and speciality sandwiches.

When selecting fresh ginger, avoid the roots that are shriveled and dry or soft and spongy feeling. Select those displaying smooth skins and emitting a slightly spicy aroma. When preparing, remove the skin with a vegetable peeler and grate or slice the root, depending on the needs of the food being prepared. Ginger can be frozen to assist with both longer storage of the root as well as easier peeling. If ginger is to be refrigerated for storage, it can be kept in a sealed bag or container for approximately 3 or 4 weeks. If frozen, it can be kept for approximately 4 to 6 months, depending on the condition and age when placed in the freezer. 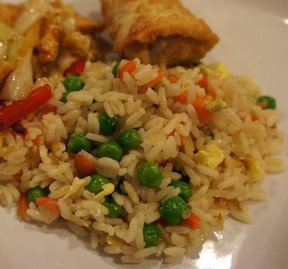