Print
A rindless white creamy Italian cheese that is considered to be pulled-curd or spun-curd cheese (pasta filata), since the curds are placed into the whey when it is still very hot and then removed to be pulled as well as kneaded into the desired consistency. This cheese has a semi-soft to firm texture and a mild tasting flavor. Historically, the cheese was made from water buffalo's milk and referred to as Buffalo, Mozzarella Di Bufala, or smoked as Bufala Provola, providing a sweeter flavored cheese than the Mozzarella made with cow's or goat's milk. It is now more common to be commercially produced with whole milk or a mix of goat and cow's milk. Mozzarella cheese is produced as a semi-soft fresh cheese or a firm block of cheese made with low or non-fat milk. The firm block is most often used to provide "texture" rather than flavor to food dishes, such as pizza, where the melting properties of the firmer cheese are popular. The texture of the firm cheese melts well and absorbs while enhancing the flavors of other ingredients amongst the cheese.

As a fresh cheese, each producer may interpret "fresh" differently. When commercially produced for pizza, the firm cheese is available as a low moisture variety (less than 50 percent) or a high moisture variety (over 52 percent). When produced as a "fresh" cheese for food stores, it is available in several common forms. As a block form known as pizzaiola or regular mozzarella, it is sold in squares or rounded slabs with a firmer texture containing higher levels of salt and the most flavor of the various forms. In this form it is not packaged within whey. This form is the easiest to shred and is most often used for snacking, appetizers, salads, pizzas, and pasta. Other forms of mozzarella surround the cheese with brine or whey to preserve the freshness, such as ciliegini, small cherry-shaped balls of cheese having a milder but fresh flavor. This form can be eaten as an appetizer or as a complement to salads and fresh foods. When sold as larger cone-shaped drops known as bocconcini, the cheese is packed in brine and is used most often in appetizers and salads. Another form of the cheese that is similar to bocconcini is the fresh mozzarella that is very soft, pliable, and sealed in water to keep it fresh and creamy. It is used most often to complement salads and fresh food dishes. The stretched curd, sometimes sold as "string cheese" although it is technically not string cheese, is another form of the cheese that is not encased in water and is similar to the block form in texture, flavor and salt content. Mozzarella cheese is also available unsmoked, smoked lightly (known as affumicata) or dried and heavily smoked (known as scamorza). Mozzarella affumicata is formed into large balls of cheese and smoked over wood chips to become dark brown in color. Mozzarella scamorza has a denser texture and is smoked over pecan shells to enhance the flavor and darken the color of the cheese. Despite its somewhat bland taste, mozzarella is favored as a melting cheese that forms an elastic texture desired by many chefs and cheese consumers. The flavor is delicate and slightly sour, with a milk-like freshness. The longer the cheese ages, the softer and more sour it becomes.

Fresh mozzarella is best served the day it is purchased, but can be stored, wrapped in plastic, in refrigerated areas for only several days to retain the flavor and quality of the cheese. If the cheese was in brine initially and is to be stored, place the cheese and brine in a glass or ceramic bowl, tightly covered in plastic, and refrigerate. Before serving, allow the cheese to warm to room temperature. Another way to store mozzarella if it is not to be used immedately, is to wrap the cheese in plastic, freeze it, and then prior to serving, allow it to defrost in the refrigerator before removing and warming to room temperature. Cheese that is frozen does decrease in flavor and may become more moist, limiting it's value as an appetizer, but it still will work well as an ingredient for cooked foods. 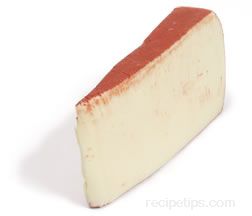 cheeses of italy farmhouse to mozzarella