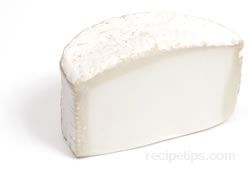 Print
A dairy product made from the curds of milk that have been separated from the whey. The curds form a firm substance that is aged to create added flavor. There are hundreds of varieties of fresh and aged cheese made in a variety of countries, many of which are made with ingredients and processes that exist in the region from which they originated. Cheese is divided into 5 major groups which include: hard cow's milk cheese, soft cow's milk cheese, goats milk cheese, sheep's milk cheese, and blue cheese. From these groups, the various cheeses are then selected for their intended purpose, flavor, and suitability for recipes and serving objectives. With the different varieties, there are also a number of different forms, such as grated, sliced, block, wedge, soft, hard, or spreadable from which a specific type is chosen for a specific purpose.

Cheese can be served for appetizers, toppings, sandwich filling, entrees, and desserts or used as an ingredient for numerous food dishes. When serving cheese as an appetizer, serve approximately 1 ounce per person. If several different types are being offered as courses to a meal, begin with the mildest cheese, serving increasingly stronger cheeses as the courses progress. Additional foods can accompany cheese to enhance the flavor, such as almonds, walnuts, apples, pears, slices of hard breads, or crackers. Serve breads and crackers that are mild in flavor so they do not attempt to compete with the flavor of the cheese. Fruits go well with a variety of strong cheeses, such as blue cheese with slices of pears.

If mold appears on soft cheese, discard the cheese immediately. On hard cheese however, the mold can be removed by cutting it off, making sure not to contaminate the knife and spread the mold by slicing too closely to the spores that have formed. Some types of cheese, such as Asiago, Cheddar and Parmigiano Reggiano that have aged, may form small crystalized ganules that create a rough and gritty texture on the cheese. This is not harmful and is due to the breaking down of the calcium in the milk that is used to make the cheese. As the cheese ages and the calcium breaks down, it forms crystals that become a natural process of the cheese aging.