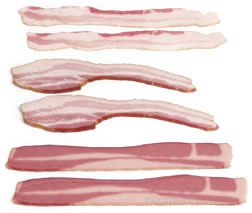 Bacon is typically processed into slices and is primarily made from pork. However, other types of meat are used and the term bacon is often used to describe other types of bacon-like products. Sliced bacon is produced from smoked turkey, which has an excellent bacon flavor and contains less fat than pork bacon. Canadian bacon is another variety available that is round in shape with more meat and less fat than traditional bacon strips. Cottage bacon is a thin slice of leaner pork meat, taken from a shoulder cut, that is typically oval shaped and quite meaty. Italian bacon, referred to as pancetta, is processed by seasoning a pork belly side of meat with salt and great amounts of pepper. It is then curled into a tight roll and wrapped in a casing to retain its circular shape. It is then cured but it is not smoked. Another type of Italian bacon is produced in a slab form that has been smoked. This bacon is sliced into strips of bacon similar to many bacon products in the U.S. Some European countries refer to bacon as rashers, which are thin pieces of meat that are produced in wide strips with a shape similar to a chop. A precooked variety, known as canned bacon, is also available. This product is a shelf stable bacon that requires no refrigeration. Bacon products freeze well to store for longer periods of time.

When cooking bacon, several methods can be used to reduce the amount of grease that splatters from the frying process. Reduce the amount of heat or temperature when frying. Excessive heat removes the moisture in the meat faster than necessary, resulting in small bursts of juice as it hits and explodes in the frying grease. Use medium low heat levels to fry the meat with a consistent and slower cooking process. Another tip is to use a splatter screen placing it over the fry pan to serve as a fine meshed screen that keeps splattering materials from escaping the pan. Also, a small amount of flour can be added to the pan prior to frying to keep the splattering to a minimum. 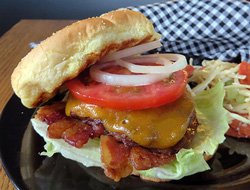 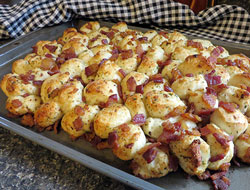 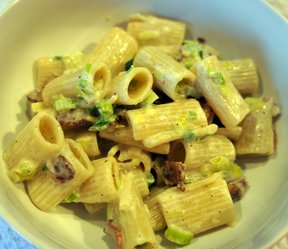 creamy pasta with bacon and leeks 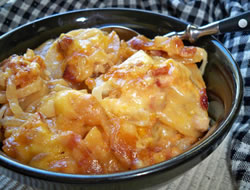