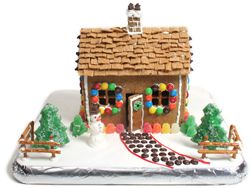 Print
A traditional baked creation that is most often made during the year end holidays to serve as both a decoration and an edible food. Gingerbread Houses are typically made using a Gingerbread House mold constructed of cast iron or a similar material that allows the Gingerbread cookie dough to be placed into the molds and formed into the various sections of the house. After being baked the house is then decorated with icing that outlines the windows, doors, shingles, and any other aspect of the house desired. Common garnishes that may surround or be added to the Gingerbread House to create a theme include gum drops, candy canes, miscellaneous bits of candy, gingerbread people, trees, and candles.

Recipes for Gingerbread originated in Europe, starting out as sweet cookies and breads. When made as a cookie, the Gingerbread was stiffer in texture and soon became a food item that was easily deocorated with icing and candied garnishes. Some of the European fairy tales were soon re-created with various Gingerbread designs, most notably the published stories of Hansel and Gretel. As the Gingerbread recipes arrived in the U.S., a variety of different sweet creations evolved, eventually becoming made into Gingerbread Houses as the houses became extensions of various fairy tales, similar to the European traditions. Although a baking mold simplifies the process of building a Gingerbread House, other methods for constructing the houses are also available with numerous design ideas and decorating themes. 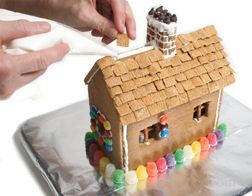 how to make a gingerbread house 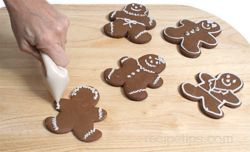