Print
A corm or fleshy bulb that forms at the base of a plant known as the trapa natan, which is grown in streams and bodies of water. A common ingredient in Asian cooking, the water caltrop is often confused with the Chinese water chestnut, a water caltrop grown in Asia and Europe that is not from the same plant family and therefore, is not the same tuber. The water caltrop, which is also known as the European water chestnut, is a member of the Trapa nantans genus, which is part of the Trapaceae family of water chestnuts. It is a plant which floats in the water, sprouts broad leaves rather than narrow spiked grass-like leaves and develops a shelled nut or corm that is the part harvested to be cooked.

Illegal in some U.S. states, the caltrop should not be eaten raw due the toxins contained in the meat of this plant, which can only be neutralized by cooking the plant. The water caltrop produces a corm or fruit similar to a nut that has the shape of a small bat with outstretched wings or water buffalo horns. It is this fruit that is cooked with other ingredients to become the edible portion served in European, Asian and African food dishes. The corm of the caltrop is also known as the Singhara nut, Jesuit's nut or Ling nut. 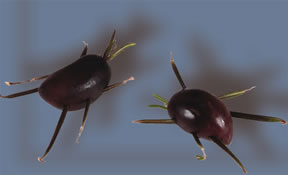