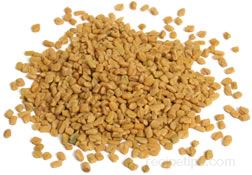 Print
A spice that is native to western areas of Asia and commonly used in cooking foods from Asia and India. Considered to be an "ancient" type of spice, since it was used by Greeks and Egyptians in early civilizations, fenugreek is member of the pea family of plants. Early users of this spice found it contained medicinal properties that aided with digestion and with stimulating their appetite.

Also known as methi, this annual plant develops a pod that contains tiny square seeds with a very hard texture. The seeds are best used by mild roasting to remove their bitter taste, but over roasting can result in maintaining the bitter flavor. Fenugreek is difficult to grind, so the roasting aids in softening the structure of the seed so it can be made into a powder. Ground fenugreek is commonly added to curry powders, pickled foods, stews, fish, meat and poultry dishes, and in vegetables and baked goods such as bread.