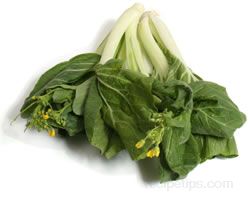 Print
An Asian vegetable and green related to the Pak Choy family of cabbage plants, that is often considered to be the flowering version of this vegetable green. Also referred to as Bok Choy Sum, this plant has small yellow flowers that bloom on long fleshy white or green stalks topped with dark green oval-shaped leaves. Green Choy Sum has green stalks while white Choy Sum grows with white stalks. Choy Sum is grown for its thick-stemmed shoots and flower tips that are crisp and flavorful. It is often served in salads, Asian soups or stir-fried dishes containing meat and vegetables, providing a crisp textured vegetable with a delicate, slightly mustard-like flavor. It has a similar appearance and may be confused with broccoli raab however, it provides a milder and sweeter flavor.

Choy sum is a name commonly used to refer other types of Asian greens such as edible rape, yow choy sum, choy sum, yu choy, Chinese flowering cabbage, flowering white cabbage, or green choy sum, which are all names that may be associated with this vegetable. The name choy sum translates into "flowering green" which it is. However, choy sum, is typically not the same green as yow choy, although both bok choy sum and yow choy may be referred to as choy sum. Choy sum has a broader stalk with an appearance that looks the same as bok choy, except it contains smaller flowering stalks in the center of the green. Despite the confusion, the choy sum family of greens are all members of the cabbage family.

When selecting, choose greens that are not wilting nor contain brown spots. The stalks should be firm and not limp or fibrous looking. To prepare, wash the greens thorougly and then trim a small amount from the bottom of the stalks. The stalks can be served cooked until wilted but retain the crunchy texture. The greens can be prepared by boiling, steaming or stir-frying. If blanched to eat as a vegetable, choy sum can be served at room temperature and dressed lightly with soy sauce or a sesame oil. To store, place the greens in a plastic bag and refrigerate. 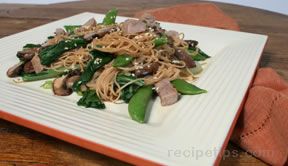