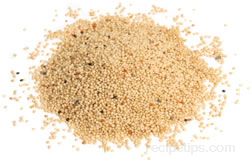 Print
An herb that is technically not a grain, but is often used like a grain because of its abundance of grain like seeds. The amaranth plant grows as high as 7 feet or taller with a celery-like stalk that tastes somewhat like an artichoke. Its leaves have a taste similar to spinach, but are much sweeter. The head of the amaranth plant sprouts crimson red flowers with seed heads that resemble bushy versions of corn tassels. One plant may produce as many as half a million seeds. Amaranth is usually grown as a secondary crop in many areas of the world such as Asia with most of the production in the United States limited to Nebraska, Colorado, and Minnesota. Amaranth is generally available as either a red amaranth variety (such as red saag, red spinach, all red amaranth, or red leaf amaranth) or a green amaranth (such as green pointed leaf, white leaf, bayan, tender leaf, or green round leaf). The red variety of the herb has broad green leaves with crimson colored veins or deep red leaves, while the green variety has broad leaves that are entirely dark or light green in color.

In addition to the different varieties of amaranth, another way to classify this plant is according to usage as grain amaranth, leaf amaranth, or as grain and leaf amaranth. Fresh amaranth greens are common ingredients in a variety of Asian food dishes. Chinese foods typically use the red-leafed variety while the cuisines of India, Japan and Taiwan prefer the lighter green Amaranth. Amaranth greens, which can be served as a good substitute for spinach, will last several days but are best if prepared immediately after being harvested. To prepare, wash the greens thoroughly, then slice off the older woodier stems using only the younger tender stems and leaves with a mild spinach flavor for salads. Stems and leaves that may be more mature can be used in stir-fry dishes, soups and steamed dishes with noodles. The older amaranth greens provide a sharper and tangier flavor due to age. To store, place the stems with leaves in a plastic bag and refrigerate.

The amaranth seed (or grain) is light tan in color and has a very mild tangy or peppery flavor. Since it is gluten free, it is a good substitute for those who are allergic to grains containing gluten. When used like a cereal grain, it can be processed into cereal flakes, added to baked goods such as muffins and breads, or used to make a hot porridge cereal that is crunchy and nutty tasting. Amaranth can also be used as a food extender, for cookies and desserts, or as a side dish similar to potatoes or polenta. The seeds are often milled into flour that can be used for a variety of baked goods and pasta. As a source of nutrients, amaranth provides protein, calcium, iron and zinc. Amaranth is also known as callaloo, Chinese spinach, quelite, yeen choy, yin choy, hsien, marsa, tamri bhaji, lol cholai, chaulai, Jacob's coat, Joseph's coat, piru namul, or hiyu.