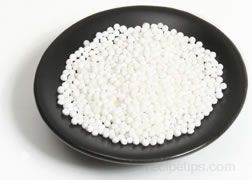 Print
A starchy ingredient, derived from the bitter variety of the cassava tuber, also known as the yuca root. Tapioca is most commonly formed into flour, round pellets (pearls), flakes, granules, or syrup. As a flour, Tapioca is used for a thickening agent in pie and tart fillings or in soups and sauces. Tapioca flour is also known as cassava flour.

Pearl Tapioca is the most common variety available, which is produced into pellet sized balls or powdered forms of dried Tapioca. It is this form of Tapioca that is used for making Tapioca puddings and custards. In Britian, Tapioca pudding is considered to be a member of a group of traditional milk puddings produced as desserts and fillings. Uncooked Tapioca can be stored in a cool dry area and can be kept an indefinite amount of time if not exposed to excessive heat or moisture. Cooked Tapioca should be refrigerated and can be kept several weeks. When cooking Tapioca, do not overcook it as it becomes starchy and stickly. Cooking it until it becomes translucent is the best measure of doneness.