The true Sweet Potato has a shape that is often elongated and tapered at each end, or somewhat oval with a rounded end. The yam however, is typically a rougher skinned vegetable that may be either long and cylindrical with a tapered end or short and round in shape. Yams are often sold as chunks of tuber that may be irregularly shaped rather than fully formed.

Sweet Potatoes are often classified according to the color of their flesh; yellow, orange, white, or purple. The yellow, white and purple-fleshed tubers are most often marketed as a sweet potato while the orange-fleshed varieties are marketed as yams. Some of the common varieties of orange-fleshed Sweet Potatoes include, Beauregard, Golden, Jewel, and Red Garnet. Typically, the Beauregard is the variety most readily available in stores. The common varieties of the white Sweet Potato (boniato in Spanish) include Batata (Batata Dulce, Cuban Sweet, or Camote), Japanese Sweet (Japanese yam, Satsuma Imo, Kotobuki, or Satsumaimo), Yellow Jersey, and White Sweet. The Japanese Sweet Potato and the Japanese Yamaimo (Mountain Yam) are two different tubers which should not be confused. With a outer skin color similar to a baking potato (light tan), the Yamaimo differs in appearance from the reddish-pink skin coloring of the Japanese Sweet. The Japanese Yamaimo is considered to be a sticky, mountain yam which is the variety often used to make soba noodles while the Japanese Sweet is more dense than the yam and low in moisture content. When prepared, the Japanese Sweet is a good potato to cube and roast or stir-fry as it cooks well with faster cooking methods on a higher heat setting. The Okinawa or Okinawan is a purple-fleshed variety that is not as readily available. Covered by a thin, pale tan colored outer skin, this potato provides an enjoyable buttery and nut-like flavor. The Okinawan is also known as Tumai Kuru, Beni Imo, Ube or the purple yam. Yellow Jersey potatoes may be slightly more fiberous than other varieties and not quite as sweet in flavor.

In Australia, the Sweet Potato is referred to as the Kumara which is sold as a red, gold or orange Sweet Potato. The red Kumara has a red outer skin with white inner flesh, while the gold Kumara has a light brown skin covering a tan to grey-white flesh. The orange Kumara, which is similar in appearance to Beauregard, Jewel, or Red Garnet, has an orange to red outer skin with an orange colored inner flesh.

The orange or sweet varieties of the Sweet Potato are generally uniform in color throughout the flesh which can appear pinkish, orange, brown, or purple in color with a rich or sweet tasting flavor. The white or yellow Sweet Potato may have an irregular light pale yellowish color or darker pale reddish-orange hues with a creamy, but drier texture that is not nearly as sweet or moist as the orange-fleshed variety. As a general rule, the potato will be drier textured and less sweet as the color of the flesh lightens.

After Sweet Potatoes are removed from the ground, a grower will typically cure the potatoes in a storage area that is maintained at 80ºF to 85ºF with humidity in the range of 85%. As the potatoes cure in this environment, their maltose enzymes begin to increase the sugar content within the potato flesh which is what provides the sweet flavor in the potato flesh when baked. After proper curing the potatoes are ready for market. Select potatoes that are firm and small to medium in size, avoiding those that have shriveled skins, soft spots, or blemishes. After being selected, Sweet Potatoes should be stored in a cool, dark, and dry area with a temperature range of 50ºF to 60°F which will allow the potatoes to be stored for 3 to 4 weeks if necessary. Otherwise, use within a week. Do not store in the refrigerator where low temperatures such as 40ºF will adversely affect the potatoes and may convert the sugars to starch, which will cause a bad flavor and a hardened core to develop within the potato. Also, storing in the refrigerator will have a tendency to increase the chance of deterioration and decay resulting in a potato that will become overly mushy when cooked.

Sweet Potatoes go well with meat, poultry, fish and seafood. They can also be added to casseroles, soups and stews to enhance the flavors of other ingredients. In addition, Sweet Potatoes can be served as an ingredient for salads, pies, cookies, cakes, puddings, and custards. The sweet flavor of this vegetable can complement a variety of other sweet flavored vegetables such as carrots, rutabagas and parsnips. 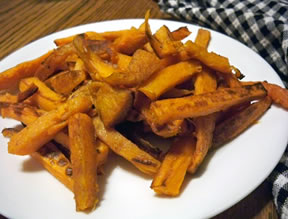 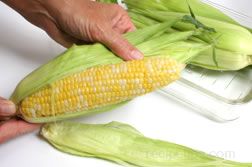 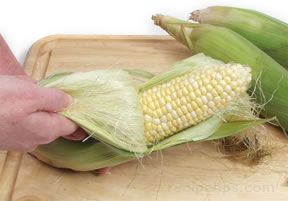 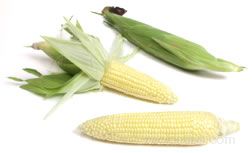