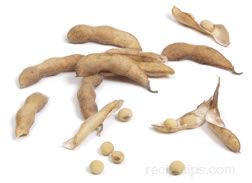 Print
A nutritious legume that is round in shape, small in size, and very versitile as an ingredient for a variety of foods and food dishes. Fresh soybeans are green in color while the dried soybeans are either yellowish-tan or black in color. They can range in size from as small as a pea to almost 1/2 inch in diameter. Soybeans are high in protein and low in carbohydrates. Black soybeans, common in Asian cooking, have a slightly sweeter flavor than yellow soybeans which have a bland bean flavor. The dried or mature bean is used to make a variety of products, such as tofu, soy milk, soy sauce, and snack foods. Although it is not a popular cooking bean, because of its bland flavor, it can be presoaked and then used as an ingredient for soups, stews and casseroles. Soaking the mature bean improves the flavor and decreases the amount of time required for cooking.

Dried soybeans and soybean products are widely available in supermarkets and health-food stores, while fresh green soybeans are generally available in Asian markets, natural food stores and produce markets. The fresh soybean, sometimes referred to as the edible fresh green soybean or edamame, is a bean that is harvested before it matures. They can be served as a side dish, a snack, or used as an ingredient for salads, soups, casseroles, couscous, rice, pasta, and other food dishes. When cooked, the fresh beans are often placed in water, in their pod, and when the water boils, they are simmered for 5 minutes before being removed from the pod and served or added to other foods. Fresh beans should be eaten within several days. If they are frozen they can be kept for several months, while dried beans are easily stored in air-tight containers for long periods of time.

Soybeans are also referred to as soya, soya bean, soja, or soi.