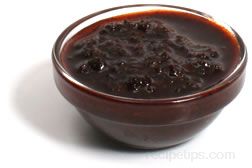 Print
A traditional Asian food dish which consists of preparing cubed meat or vegetables that are marinated, placed on a skewers (bamboo sticks), and then grilled, broiled or roasted on an open fire. Meats such as chicken, beef, lamb, pork, fish, or shellfish are commonly used as the main ingredient. The meat is marinated in a satay marinade which may consist of any of a variety of spices such as chile powder, coriander, cumin, caraway, garlic, onion, vinegar, brown sugar, soy sauce, and oil. After the food is cooked, it is common for a peanut sauce to accompany the food however, there are many other types of sauces that are also served, which may include sweet and sour sauces, pepper sauces, or red chili sauces.

A wide variety of satay recipes are continually being created for all types of cuisine, including non-meat foods such as tofu. Generally, the recipes all follow some form of the satay procedures involving marinating the main ingredients and placing the food on skewers over a grill. Although the spicy sauce is generally used as a marinade, it may also be used as a stir-fry sauce, a dipping sauce, a braising sauce, or as a dressing. A satay, which can be served as an entree or an appetizer, may also be referred to as saté or a sateh. 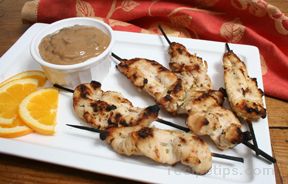 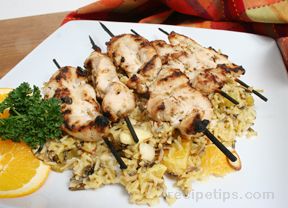