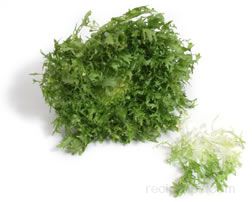 Print
A variety of endive that is a member of the chicory family of greens. It grows prickly green leaves that provide a slightly bitter taste. It is commonly served as a salad green. Curly endive is often referred to as chicory and may confuse many when labeled as loose-leaf endive or some of its other names such as loose-leaf chicory, chicory, chicory endive, curly chicory, frisée, or frise. The confusion occurs due to the fact that the term "chicory" in America or France refers to what Britain calls endive and endive in Britain becomes chicory in France and America.

Frisée and escarole are common greens that can be confused with and referred to as chicory, since they are both members of the chicory family of greens. Frisée is basically the smaller version of curly endive, known as baby curly endive. This vegetable green has larger, ripple-edged or ragged leaves that are green on the outer sections and cream colored closer to the stem and stalk, forming a very compact heart. The lacy outer leaves provide a prickly texture and a bitter taste, while the inner leaves are milder. Escarole, a similar salad green, is a crisp, broadleaf type of endive, which is also known as Batavian endive, broad chicory, common chicory, or batavia. The outer leaves, which have a broad crinkled shape, provide a slightly bitter taste, yet not as bitter as Belgian or curly endive. As the outer leaves are removed, the inner leaves display a paler green coloring with more white and a taste less bitter than the outer leaves. When cooked, all of the greens are often served as a vegetable steamed or braised, and can be added to soups for flavoring in the later stages of soup making.