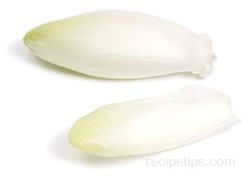 Print
Used in salads, appetizers, hors d'oeuvres, and side dishes, Belgian endive has narrow, spear-shaped leaves that grow close and tightly wrapped around the head. The crunch-textured shoots of this plant are grown in the dark in order to retain the pale white color and to prevent the leaves from turning darker colored. As it begins to grow, the Endive is typically covered with a loose layer of dirt or sheets of opaque plastic, or immersed in water in order to keep the full light from reaching the plant leaves.

A member of the chicory family, Belgin Endive may be creamy white with either very pale yellow tips or scarlet to deep red colored tips and referred to as White Belgian Endive or Red Belgian Endive. The Red Belgian Endive is a cross bred Endive that is a combination of radicchio and Belgian Endive. When the red variety is cooked, the leaves become white, loosing its striking red color. Belgian Endive is commonly added to salads, used as a wrap for appetizers, cooked in soups and prepared with ham and cheese. It provides a mild and slightly bitter flavor that becomes increasingly bitter as the leaves darken and the Endive ages. The majority of the bitter flavor comes from the base and goes upward about 2 inches into the Endive. If this section is cut out as a cone-shaped piece with the round part being at the base and the point extending up into the Endive shoots, it will lessen the bitter flavor of Endive. Although it may be confused with Curly Endive, Belgian Endive is not the same vegetable as the Curly Endive, which is a broader and larger green-leafed vegetable. Belgian endive is also known as Belgian chicory, Brussels chicory, blanching chicory, chicon, Dutch chicory, French endive, witloof (Flemish for white leaf), or witloof chicory. (The confusion occurs due to the fact that the term "chicory" in America or France refers to what Britain calls endive and endive in Britain becomes chicory in France and America.) As a substitute, use radicchio, arugula or watercress. 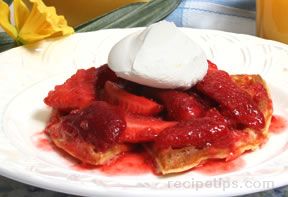 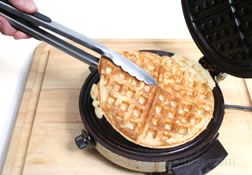