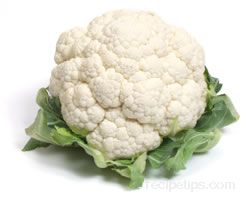 Print
A type of cabbage with numerous buds known as florets, that form a compact cabbage-like head. Like broccoflower, this vegetable is actually a flower that grows a single stalk or stem which sprouts a bud covered by green leaves. High in vitamin C, the Cauliflower also provides other nutrients in the form of carbohydrates, dietary fiber, vitamin B, and potassium. Although the peak growing season for Cauliflower is from September through November, it is readily available year-round.

Several different varieties of Cauliflower are grown, each distinguished by color. In addition to white Cauliflower which is the most common, there is Golden or Orange Cauliflower, Purple Cauliflower, and Green Cauliflower. Orange Cauliflower, which may also be referred to as Golden or Yellow Cauliflower, is grown for its bright color and abundance of viatmin A, which significantly exceeds the amount in White Cauliflower. Slightly creamier in flavor, the Orange Cauliflower can be cooked without losing its color, adding to its decorative look when served. Antioxidants flavonoids formed as anthocyanins are believed responsible for creating the purple colors in this variety of Cauliflower, causing it to become dark red to deep purple in color as it matures. When cooked, the Purple Cauliflower does not require the length of time necessary for cooking White Cauliflower. It overcooked, the purple color may not be retained and become a shade of green instead. To keep the purple color, add a little lemon juice or vinegar to assist with setting the color. For Green Cauliflower, a hybrid vegetable is produced that is a cross between Cauliflower and broccoli. There are two types available, one known as Broccoflower while the other is referred to as Broccoli Romanesco. The Broccoflower has the traditional shape and floret design of a White Cauliflower, displaying an evenly rounded head of buds. With the same chartreuse green coloring, the Broccoli Romanesco is different in shape, containing florets that form pointed cones with increasingly larger buds sprouting as the floret decends toward the stem. High in vitamin C and with more protein and minerals than White Cauliflower, the Green variety can add much in not only nutritional value but also for appearance when presenting this vegetable on the table. In addition to the various colors, Cauliflower is also grown as a miniture version, providing a smaller head that can be prepared and served in the same manner as traditional sized Cauliflower, but is more compact for single servings.

When selecting, choose firm, somewhat heavy, unblemished heads that are uniform in color. For storage, keep in a plastic bag that is not airtight, placed in the vegetable crisper of a refrigerator. Depending on maturity, the Cauliflower can be kept for 3 to 5 days. To prepare, serve it raw as an appetizer with dips or add it to salads for texture and nutritional value. When cooking, do not overcook this vegetable or it becomes mushy and untextured. It can be steamed until tender, placing the stem side down in a covered pan with 1/2 to 3/4 of an inch of salt water, allowing it to boil at a medium heat level for 4 to 5 minutes per pound of Cauliflower. For microwave cooking, use only 1/8 to 1/4 inch of water for 3 to 4 minutes per pound. Check the texture by piercing the Cauliflower head with a knife and allow, if necessary for the vegetable to continue cooking for 1 to 2 minutes in the covered pan while the heat is turned off. 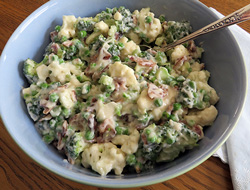 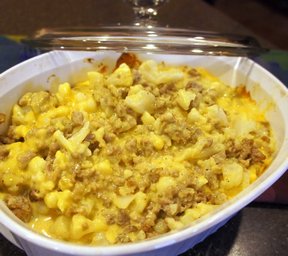 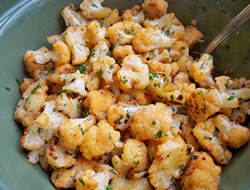 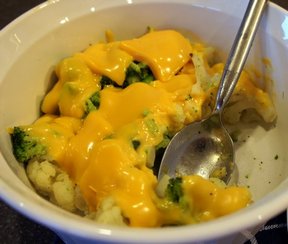 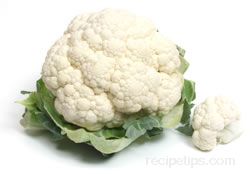