back to Bombay Duck 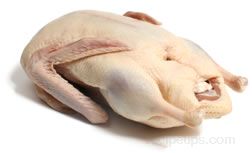 A variety of waterfowl that may be wild and considered to be a game bird, or a type of duck domesticated and raised for food purposes. One of the most common types of wild ducks sought for its meat is the wild Mallard, while the most common types of domesticated ducks include members and non-members of the Mallard family. Ducks that are decendants from the Mallard species include the White Pekin duck which is also known as the Long Island duck, a type of duck raised for its meat. Other varieties include the Muscovy or the Moulard ducks, both raised for their parts that are used as ingredients in recipes or as delicacies, such as foie gras.

Ducks, or ducklings as they are also referred, should be no more than six months old and weigh 3 to 7 pounds providing a tender rich meat for cooking. Ducks most suitable for broiling or frying are classified as "broilers" or "fryers" when they are no older than 8 weeks. Ducks that are 8 to 16 weeks old have gained more fat and are then classified as "roasters" which are most suitable for roasting or cooking with a rotisserie grill. The meat of a duck is all dark meat, providing a distinctively hearty flavor that may be rich tasting, depending on the method and procedures for preparation. Wild duck has more of a "gamey" flavor having been raised on wild foods. Domestic ducks are more moist and tender, providing a milder flavored meat. Commercially available ducks (domesticated) are graded as Grade A, B, or C. Grade A and Grade B ducks can be found in food stores and markets, with Grade A being the best grade containing the most meat. Ducks considered as Grade C ducks are traditionally sold to food processors for use in commercial products.

When selecting a whole duck, choose those with tender and meaty breasts covered with firm skin that is not noticably wrinkled. Since many ducks are frozen, it becomes difficult to depress the flesh, but most can be checked for round, plump features. Duck parts are also available and can generally be purchased as hindquarters or breasts. Hindquarters consist of leg and thigh meat that can be grilled, roasted, slow-cooked, or pan fried for best results. Duck breasts consist of a boneless piece of meat that may be skinned or skinless that can be prepared similar to chicken breasts, by roasting, searing, sautéing, slow-cooking with other ingredients. Ducks typically contain a large amount of fat in relation to meat, which can be carved away before cooking. Additional fat will drip from the duck as it roasts and may cause some smoking, so it is best to consider the best way to roast duck meat before the excess fat burns. When necessary, the excess fat can be siphoned off to assist with the smoking problems. Some prefer to render the fat from the skin prior to roasting, so it crispens the duck and also makes it leaner. A common French method of preparing duck with fat is known as duck confit, which involves cooking the duck and then refrigerating it in its own fat to preserve the meat and to seal in the moisture. When prepared with duck, the confit often combines thyme, garlic, oil or fat, salt, and pepper with the meat that becomes a main ingredient for stews or meat filling for crepes. When comparing the meat yield to a chicken, there is much less meat on a duck than a chicken of comparable weight. A duck weighing 6 to 7 pounds will most often serve 4 people. If concerned about the amount of fat, the Muscovy duck is the leanest of all the varieties of ducks.

Store fresh ducks in a refrigerator for no more than 3 days for the best flavor. Remove any giblets or stuffing if placed in the cavity of the duck, prior to being refrigerated. Frozen ducks can be kept for longer periods of time before being thawed slowly in the refrigerator. 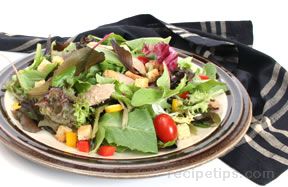 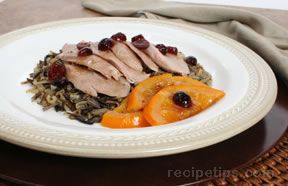 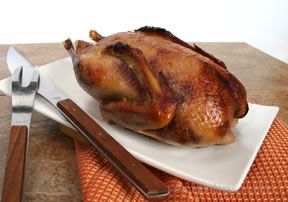 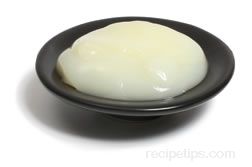 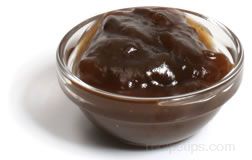