Print
The process of adding a substance to bread dough (and other baked goods) that enables the dough to rise. Risen breads rely on a means of producing carbon dioxide gas that becomes trapped in the batter or dough causing the rising action. The carbon dioxide gas is produced either as a byproduct of fermentation or through the use of chemical agents. The fermentation process is activated by naturally occurring yeast that is airborne, by yeast that exists on the surfaces of wheat grains, or it may be activated by packaged baker's yeast that became widely available at the end of the nineteenth century. The yeast consumes some of the flour in the dough, producing carbon dioxide as a byproduct, which, in turn, raises the dough. Chemical leavens, which act very quickly, produce carbon dioxide gas in the batter or dough without the need for yeast.

Risen breads can be prepared using the “direct yeast method,” also known as the “straight yeast method,” or with the use of a natural "starter," or with chemical leavening agents. The direct or straight yeast method for leavened breads uses commercially produced packaged yeast that is activated in warm water for a few minutes and then blended with the flour and other ingredients. This is a faster method for producing yeasted breads and is the most familiar method used by the home cook. Before a reliable baker's yeast became available in the nineteenth century, brewer's yeast was often used, but it produced uneven results. The types of packaged yeast available today produce excellent results.

The use of a starter is a traditional method of leavening requiring only a flour, water, and yeast mixture, which is allowed to ferment for varying periods depending on the type of bread being prepared. A starter may contain additional ingredients, such as milk, sugar, or honey, depending on the recipe. Some starters do not contain commercial yeast, but only flour and water and rely on airborne yeast for fermentation. This type of starter is perhaps the oldest method for preparing leavened breads.

Chemical leavening agents, which became available during the nineteenth century, are also widely used. Breads using chemical agents, such as baking soda and baking powder, for leavening are known as quick breads because of the rapid rate of the rising action and the short preparation time required.

The leavening method used for bread making depends upon the type of bread being prepared. The leavening method also has much to do with the flavor, texture, and shelf life of the bread. For example, two breads with exactly the same ingredients will have very different qualities if one of the breads was prepared with a starter and the other was prepared directly with packaged yeast. 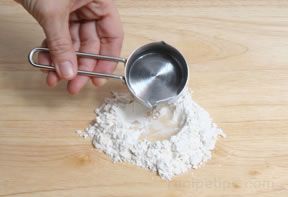 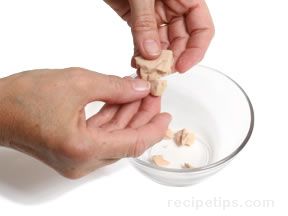 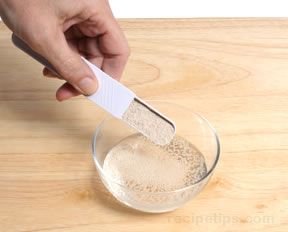