Print
Often used by those who make their own meat ingredients for sausages or meat dishes, Meat Grinders are a common utensil for grinding a variety of ingredients that may include seasonings desired for personal tastes in the foods being prepared. Traditional grinders that have not changed much in many years are manually operated, made of cast iron and shaped very similar to the original designs in the early 1900's. Electro-plated with a smooth and sanitary finish, manual Meat Grinders are built to be clamped to a counter or table and hand-cranked to grind 2 to 3 pounds of meat per minute. The hand-operated grinder will typically include several cutting plates that rotate against a cutting knife to produce small (3/16 inch) or large (1/2 inch) bits of ground foods. The food to be cut, which may be turkey, chicken, duck, pork, beef, veal, venison, or vegetables, are hand fed into the funnel formed on top of the grinder body and driven by a spiral auger into the cutting blade (knife) as it feeds the materials through the cutting plates.

In addition to manually operated grinders, there are also electric operated Meat Grinders for the countertop that are more complex in design, but similar in function. Like the manual grinder, the food ingredients are fed into a top loading funnel of the electric grinder and are automatically moved through the grinding process to produce ground bits of meat for stuffing into sausage casings or for a variety of meat and vegetable dishes. The automatic grinders are equipped with 2 to 3 different sized cutting plates, such as a 3/16, 1/4 and 1/2 inch plates for a range of grinds. In addition, the grinder may have a food pushing tool and an assortment of sausage extrusion tubes that assist with the flow of the ground sausage into the various types of casings. Most grinders will have operational functions for reversing the motor if meat jams in the grinder, so it can be extracted when the forward motion becomes clogged. Commonly used for making sausage, hash, hamburger, and other coarse ground products, the electric Meat Grinder will produce higher volumes of foods with an ease and minimal amount of effort. 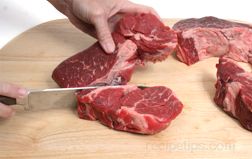 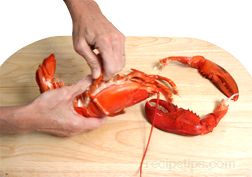 how to remove meat from lobster