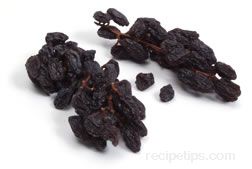 Print
A dried grape, which are eaten out of hand or added to baked goods, as well as sweet and savory dishes. Thompson green grapes can be processed into either dark and golden seedless raisins, changing in both appearance and taste. To create the dark raisins from green grapes, the grapes are sun-dried for several weeks, which causes them to take on a dark, shriveled appearance. Golden raisins are treated with sulphur dioxide to prevent their color from darkening. They are dried with artificial heat, resulting in a moister, plumper product. They both have a sweet flavor, but the golden raisin tends to taste moist and tangier flavored. Golden raisins are also referred to as Sultanas. Dark red Flame grapes are also available, which are dried into small dark variety of raisin.

Raisins can be stored, tightly sealed, at room temperature for several months, but to store longer (up to a year) they should be sealed in a plastic bag and placed in a refrigerator.

Tip: When adding raisins to batters for baked goods, coat the raisins with flour either individually or by shaking the raisins in a bag containing flour. Flour coated raisins will then stay suspended within the batter being prepared.