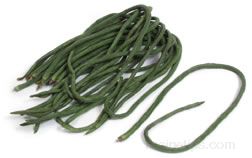 When selecting, choose smaller or younger beans that have a lighter shade of green and are more flexible, providing a tender, meatier and sweeter tasting bean. Do not select beans that appear dry, rust spotted, yellowed, or too limp in texture. Older beans having a more mature pea within, become tough and oily if they have grown to mature or large. Since the beans do not store well for more than several days, keep them refrigerated, but in the least coolest section within the refrigerator. For serving, match the beans to foods with rich flavors, such as sausages, meats, poultry, fish, spicy peppers, and rich sauces that enhance the flavors provided. This bean is also referred to as asparagus bean, asparagus pea, Chinese pea, snake bean, boonchi, dau gok, or yard long beans. 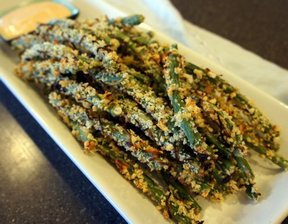