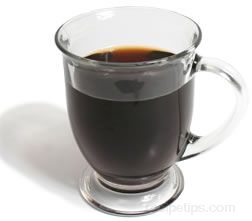 Print
An organic compound that is found naturally in various foods and plants such as cocoa beans (coffee and chocolate or chocolate milk products), tea leaves (teas), and kola nuts. It is also an additive that is often mixed with foods and various soft drink beverages to provide increased flavor. Caffeine is recognized as a stimulant that affects the human body in different ways for different people. Stimulants are known to increase blood pressure and heart rates, that for some people may be troublesome.

Me3dical research has continually provided many different opinions about the effects of Caffeine, both good and bad. However, currently there is no specific health claims that can be voiced except to say that it is a stimulant which can offer performance impovements as well as dependency problems and withdrawal symptoms. Excessive use of Caffeine may create a dependency that becomes difficult to eliminate. When a reduction in Caffeine intake is undertaken, withdrawal symptoms may begin to occur which could include headaches, fatigue, changes to moods or depression, lack of concentration, and in some instances flu-like symptoms. Thus, it is suggested by medical experts that moderation is the best procedure to follow when consuming products containing Caffeine. Two medium size servings is the most commonly recommended daily intake, realizing that different foods or beverages contain different amounts of Caffeine.