Print
A potato variety that is a cross between the South American wild, yellow potato and the North American white resulting in a light yellow skin, a fine-grained texture and a rich buttery flavor. It is a potato that contains a higher level of sugar content than many other varieties, thus providing a richer flavor and a golden brown coloring when roasted or fried in a skillet. Yukons are excellent for roasting, frying, boiling, adding to soups and stews, and for making fluffy, mashed potatoes, but are not as good as russet potatoes for baking. This variety of potato is often more expensive than many common potato varieties, but the flavor compensates for the price. Yukon potatoes are available as a large, mature potato for recipes requiring the larger size or as a small, young creamer potato for creamer recipes or other similar dishes requiring smaller sized potatoes.

When selecting, choose those that are firm and plump, avoiding those that have shriveled skins, sprouting eyes, soft spots, blemishes and green spots. Store potatoes in a cool dry place. They will keep at room temperature for up to two weeks and longer when stored in cool temperatures. Do not store in the refrigerator because the cold temperatures will convert the starches into sugar and the potato will become sweet and turn a darkened color when cooked. Do not store with onions, the gas given off by onions accelerate the decay of potatoes. Yukon Gold potatoes may be referred to as golden potatoes. 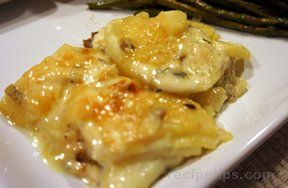