Print
The most popular tuber vegetable in the world, which is available in hundreds of varieties. Some varieties are better for specific purposes than others, such as red potatoes, which are best for boiling, and russets, which are best for frying and baking. Potatoes can be cooked by any cooking method desired. They are also converted into commercial products, such as potato chips, instant mashed potatoes, canned new potatoes and many frozen products including French fries, hash browns, and stuffed baked potatoes.

One of the most recent introductions from potato growers has been the production of a low carb potato that provides 30% less carbs than the higher starch varieties. This potato will contain approximately 13 grams of carbs for each 3.5 ounce serving, which compares to 19 grams for a typical Russet potato.

Potatoes are available throughout the year with some varieties available during only specific seasons. When selecting, choose those that are firm and plump, avoiding those that have shriveled skins, sprouting eyes, soft spots, blemishes and green spots. Store potatoes in a cool dry place. They will keep at room temperature for up to two weeks and longer when stored in cool temperatures. Do not store in the refrigerator because the cold temperatures will convert the starches into sugar and the potato will become sweet and turn a dark color when cooked. Do not store with onions, the gas given off by onions accelerate the decay of potatoes. 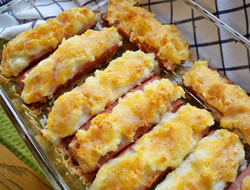 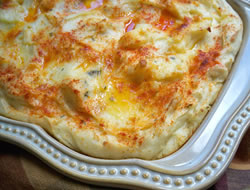