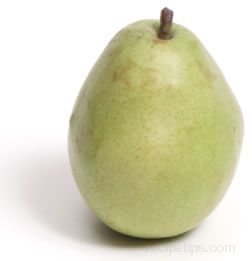 Print
A sweet, aromatic fruit that provides a sweet juicy meat beneath a soft outer flesh when fully ripe. Pears have two distinct classes of species. One is the European, which is bell-shaped, small at the top with a wider bottom, and has a soft flesh. The other class is the Asian, which is round-shaped and has a more crunchy flesh. The color of the pear depends on the variety and ripeness. Pears such as Bartletts ripen from green to yellow so it is easier to determine for this variety when they are ready to be eaten. Other varieties are more difficult to detect. Ripe pears should yield when pressure is applied with a fingertip to the area around the stem while they still may feel firm in areas around the base and away from the stem. Since pears ripen very quickly at room or outside temperature, it may only be a day or two for a pear to become mushy after fully ripening. Pears placed in a refrigerator will ripen more slowly, so is an option to decrease the ripening time, but only for a day or two.

Some of the common European-type varieties available are Anjou, Bartlett, Bosc, Comice, Forelle, French Butter, Nelis, Red Bartlett, and Seckel. Dried pears are also available but their flavor is not as sweet as other dried fruit. They are generally treated with sulfur dioxide to retain color and lengthen shelf life.

The common varieties of Asian or Japanese pears are all fruit developed from the crossbreeding of pears with apples to produce a crisp, mildly-flavored pear. There are numerous varieties of Asian pears that are all similar in taste and appearance. Some of the most available varieties include the Asia Fragrant, Hosui (Russet), Ichiban, Nashi, Kosui, Olympic, Royal, Shinko, Shinseiki, 20th Century, Yakumo, Yali (meaning dark), Yoinashi, and Yuan Huang. The shape of Asian pears generally resembles an apple shape and the skin has a reddish to pale yellowish-tan color with some having a brown-russet overtone. The inner flesh is white, crisp like an apple, and juicy. Unlike the round species, the shape of the Fragrant and the Ya pear are more of an egg or oblong shape rather than round. When served, Asian pears can be eaten out of hand or sliced as an ingredient in fruit and savory salads. It is also a refreshing dessert when cut in half with a scooped hole made in the center, then heated and served with honey placed in the scooped out section. Some of the traditional terms used for this pear are: the apple pear, Japanese pear, Nashi pear, Oriental pear, or salad pear. In Japan, it is referred to as nasu.

When selecting pears, choose those that are firm to the touch, lacking in blemishes or abrasions. Handle with care all types of pears, since they may bruise easily, especially if they are ripe. Pears kept at room temperature will ripen within several days, which can be detected by the noticable sweet aroma of the pear. To increase the ripening, place the fruit in a brown paper bag, loosely closed so the ethylene gases emitted by the fruit speeds up the ripening. Placing a banana in the bag with the pear will also speed up ripening. Pears that need to be preserved for several days can be placed in a refrigerator, which will also serve to decrease the speed of ripening by a day or so. For recipes, 1 medium-sized pear equals approximately 1 cup of slices or a half of pound of fruit.