Print
The firm but tender new shoots of seeds and beans, such as mung beans, lentils, soybeans, and alfalfa and radish seeds. For maximum crispness they should be eaten raw but if used in a stir-fry, they should be cooked for no more than 30 seconds or they will become limp.

They are available in most supermarkets throughout the year. When selecting, choose sprouts with the buds attached and that have a fresh crisp look. Avoid dark and slimy sprouts or any that are musty smelling. Sprouts can be placed in a plastic bag and refrigerated for up to three days. Sprouts, such as alfalfa sprouts, which are more delicate should be stored in its original ventilated container and should not be stored for more than two days. Canned sprouts are available but will not have the crispness or flavor of fresh.

The FDA has cautioned consumers about the eating of raw sprouts, especially clover and alfalfa sprouts, due to concerns for their developing of e-coli and salmonella bacteria causing food illnesses from undetected contamination that cannot be removed by the washing of sprouts. Therefore, it is suggested that the sprouts be cooked to remove the potential of harmful bacteria. 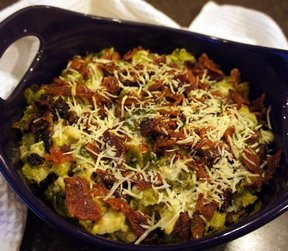