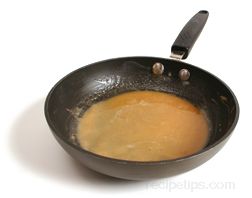 Print
A thickening agent made from fat mixed with flour that is cooked together to be used to stiffen the texture of sauces, gravies, and soups. All-purpose flour is most commonly used for making a Roux. It has moderate levels of starch and protein, so the thickening power is also moderate. The more starch content in the flour, the thicker the Roux as flour is the key ingredient that determines the thickness of the texture. As the flour combines with the fat and is heated the starch expands, thus creating the thickness in texture. The purpose of the fat is to act as a lubricant that will soften the texture and provide smoother-textured results when the cooking has ceased.

Clarified butter is the most common type of fat used by professionals when making a Roux, especially when preparing a delicate white sauce. When using clarified butter, the resulting sauce is smoother. Whole butter is also commonly used, but the sauce may require skimming during preparation to remove impurities that float to the surface. The accepted standard for the quantities of flour and fat to use for a Roux is a ratio of 6 parts flour to 4 parts fat by weight. The quantity of liquid that will be added to the Roux must also be considered when preparing the Roux as well as the desired thickness of the resulting sauce, gravy, or soup. In addition to butter, fat from poultry, meat residue and drippings, margarine, or oil and also be used to make a Roux.

Roux is easy to make, but it must be done correctly in order to successfully prepare many types of sauces. It is important to use a heavy-bottomed saucepan so that heat can be evenly conducted across and throughout the pan. Pans with good conductivity also prevent the Roux from burning, which would ruin the flavor of the sauce or soup. The butter is melted over low to moderate heat and then the flour is added to the pan. While stirring or whisking for 2 to 3 minutes, the mixture should bubble and foam and the color should gradually darken the longer the Roux cooks. A color range of light yellow to golden yellow is usually best for most sauces and soups. The Roux is then removed from the heat to allow it to cool slightly. When the bubbling has stopped, hot liquid (usually meat, fish, or vegetable stock) is poured into the pan, which is then returned to moderate heat and vigorously whisked into the Roux. Caution should be applied when working with any cooking liquids. Do not add ingredients of one hot liquid to the ingredients of another hot liquid causing the combination to crackle and splatter which may result in harmful burns. After the stock has been added, the heat is reduced to a low simmer and the stirring continues until the sauce becomes smooth. A Roux that is prepared on higher heat settings will cook too fast resulting a grainy texture for the sauce. Fat particles floating on the surface of the sauce indicates a seperation of the fat and liquids, so the Roux must be discarded. If the Roux becomes lumpy and cannot be stirred or whisked smooth, strain the Roux using a seive to remove any unwanted lumps in the Roux. Unused Roux can be cooled, wrapped, and stored in the refrigerator for later use.

There are three basic types of Roux that are commonly made: white, blonde or brown Roux. The white is cooked the shortest amount of time while the brown cooks the longest to acquire the darker color and flavor for a brown Roux. The longer a Roux cooks, the thinner the sauce becomes as the starch begins to break apart as cooking times increase. White Roux is prepared for making traditional white sauces such as Béchamel or Mornay sauce. The Roux mixture is cooked for 3 minutes or slightly longer, removing it from heat prior to a darkening in color can begin to occur. A blonde Roux which is used for making velouté sauces, cooks for 5 minutes or slightly longer in order to attain an ivory to tan color with a fragrance that is mildly nutty. The longest cooking time is used for making the brown Roux, most often used for the preparation of Cajun and Creole food dishes. The brown Roux requires 8 to 16 minutes (or longer at times) for heating and cooking the mixture, enabling it to become brown in color with a more intense nut-like aroma.