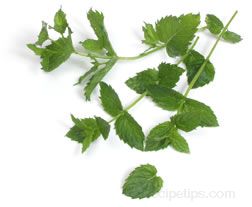 Print
A cool refreshing herb, available in many varieties, that is used to flavor desserts, teas and meat dishes, especially lamb. Peppermint and spearmint and are the two most common varieties while other varieties include apple, basil, black peppermint, calamint, chocolate, curley, ginger, licorice, mountain (wild mint), orange, and pineapple mint.

Peppermint has a distinctively sharp flavor that is most often used to flavor teas, food extracts, and oils. Spearmint has a milder and less pronounced flavor which is a favorite to flavor mint jelly and mint sauces. The mints with fruit names, such as apple, orange, and pineapple have a fruitier and sweeter taste, with the orange and pineapple having more of the citrus flavor. Other varieties, such as chocolate, licorice, ginger, and mountain each have their own distinctive taste, either representing the name given to their variety or simply a cool mellow flavor.

Mint is available in fresh sprigs or as dried minced leaves. To store fresh mint, wrap it in a paper towel and place it in a plastic bag in the refrigerator. Dried mint stored in a location where it will be away from light, heat and moisture, will keep for up to a year or slightly longer without losing flavor. To chop or mince fresh mint, remove the leaves from the stems and gather leaves into a tight, compact bunch. Using a sharp knife, cut across the bunch with a rocking motion until desired coarseness is achieved. To snip fresh mint, place leaves in a glass measuring cup and snip with a scissors until desired coarseness is achieved. 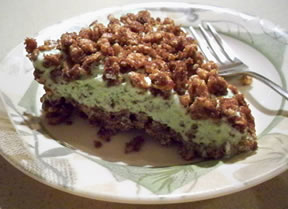 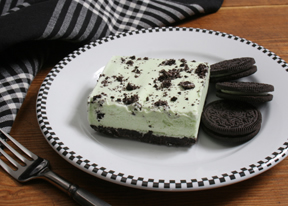