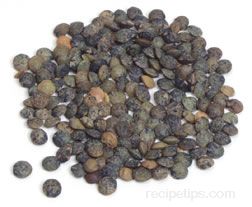 Provided By
RecipeTips
Reviewed By razbarry
"thank you for the all the information about lentils. I was recently told to ... read full review"
Share this!

Print
Flat, disk shaped dried beans, high in protein, that have a rich, somewhat sweet and peppery flavor when cooked. Lentils are one of the fastest cooking beans available, due to their flatness and size. The dried beans are available in different sizes and colors, such as brown, green, orange, red, and yellow, all of which can be whole or split. Hulled and split lentils are easier to digest and require less time to cook.

The common brown lentils are the most popular variety used in a wide number of food dishes, such as soups and stews to which they thicken the ingredients. Another variety of brown lentil is the Spanish brown or Spanish pardina. This variety is often served with poultry dishes when preparing duck, chicken, turkey, or game birds. Orange or red lentils are most common in Middle Eastern or Indian food dishes. Traditionally, the unhulled (with seed) red lentil, known as the brown massor and the hulled (seed removed) red lentil, known as the massoor or masoor dal are the most common for Indian dishes, such as soups and purées. Beluga lentils, which are very dark in color, are a variety that is often used for fish and seafood dishes. They have a size and shape that is often compared to caviar and thus the reason for their reference to Beluga.

When preparing lentils, sort dried lentils by spreading them in a single layer on a tray or platter to make it easier to sort out to discard the bad lentils. Look for discolored and misshapen beans and discard any unwanted debris. Place good lentils into a colander and rinse thoroughly using cold water. They do not require soaking, like other beans, due to their size. Once they have been sorted and rinsed, they are ready to be cooked. When using packaged lentils, be sure to check for tenderness before the end of the suggested cooking time. Most suggested cooking times are longer than necessary and could cause the lentils to become mushy, so cook only until they are tender, which is generally 30 to 45 minutes. 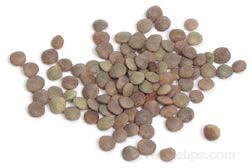