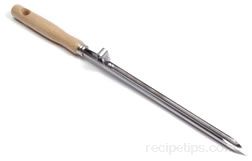 Print
The process of injecting fat into the interior of meat, generally by using a larding instrument to accomplish the task. Larding is a method used to add fat to very lean and/or tough pieces of meat. The added fat acts to moisten, enhance the flavor and tenderize meat as it cooks. Typically, a strip of lard, referred to as a lardon, is cut from bacon or pork and chilled to harden the substance. Many meat stores sell lardon for larding however, if the lard is to be cut from existing meat, slice the cuts on the diagonal to produce the most effective cuts for insertion. The fat may be seasoned with herbs, wine, salt, pepper, or other seasonings for added flavoring. The meat is then pierced across the meat's grain with the tool and the fat is either drawn through or pushed into the meat.

A lard needle may consist of a slender, heavy guage steel needle, similar to a sewing needle, except much larger and heavier, that is used for threading a string through the meat that can be used for drawing a narrow strip of chilled fat into and through the pierced meat. This type of needle is most often used for smaller cuts of meat.

Another type of larding needle, also referred to as a lardoire, is a hand-held utensil that has a stainless steel, half cut hollow shaft with a pointed end. Larger in size than the narrow shafted steel needle, this needle is used for larger roasts and cuts of meat that can take a larger diameter injection needle. WIth a pointed end, this needle can be readily inserted into the flesh of meats, opening a hole in a section of the meat that allows for the injection of the fat. The injection is made against the grain so the carved slices of meat do not contain long streaks of fat that may lay with the grain as the meat is sliced. A strip of fat is placed into the open shaft, which is then inserted into the meat and a metal injector tab can be freely pushed foward to inject the fat into the meat.

A technique similar to larding is barding - a process of laying strips of fat over the meat rather than inserting it into the flesh of the meat.