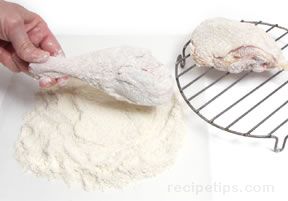 Print
The process of pulling foods through dry ingredients to coat them before cooking. Flour is the most common dredge used, but other ingredients can be used as well. For example, chicken pieces can be dredged through flour, herbs, spices, or breadcrumbs so the pieces achieve a browned, crispy coating after being cooked. Fish fillets, boneless poultry, pork cutlets, and veal cutlets are some of the foods that are often dredged in dry ingredients before cooking.

There are several reasons for dredging: the coating applied to the food acts as a barrier that keeps the food from sticking to the pan as it cooks; it enables the exterior of the food to become crisp and darken evenly without burning; and it prevents the food from becoming tough-textured.

Dredging should occur just before cooking. The coated food should not remain sitting too long before cooking, which could make the coating soggy, preventing the food from cooking effectively.

The dry ingredients should be placed on a food mat or in a shallow pan, which makes the dredging process easier. The food should first be lightly dried before dredging. All of the dry ingredients can be mixed together and then the food can be dredged through the mixture. An alternative method is to first apply any seasonings, such as salt, pepper, herbs, or spices to the food and then dredge the food in flour. This procedure enables each piece of food to be prepared with the desired amount of seasoning, rather than relying on the seasoning to be evenly distributed in the coating mixture. The food should be dredged through the flour on all sides, providing an even coating over the entire piece of food. It is important not to heavily coat the food, but simply apply a light, even coating that will insure that the food achieves a golden brown appearance and a tasty coating when cooked.