back to Steam Bake 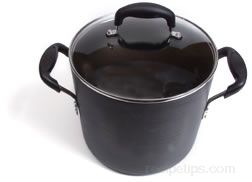 A cooking process that places foods above, not in, water that is boiling or hot enough to produce steam that cooks the foods with a moist hot air. Steaming enables foods to keep their natural flavor, color, shape, and nutritious value better than when boiled or simmered in water. It is also a method that often enhances the texture of the food being steamed. Food technicians often consider steaming to be the best way to preserve flavonoids, the compounds found in fruits, vegetables and a few beverages (beer, wine, coffee, tea, and some fruit drinks) that may contribute and provide health benefits for fighting illnesses. Steamed foods can retain the B and C vitamins that are lost with other cooking methods such as braising, baking or boiling.

Single layer steaming pots or pasta pots contain a basket perforated with numerous holes that is inserted into the pot. A one inch depth or so of water is added so the food can be steamed for approximately 30 to 45 minutes, depending on the amount of heat used. Stacked metal steamers generally have 2 levels or baskets that allow several different foods to be cooked at the same time, one above the other. Bamboo steamers are commonly used for smaller amounts of food and can be placed over woks to steam foods while the wok cooks other ingredients. Steamer baskets are small solid or collapsible baskets that hold foods to be placed into pots for steaming. Since this type of steamer allows more area for water, longer cooking times can be accomplished with foods being steamed. When steaming foods made with ingredients that may stick to the surface, it is best to lightly coat the bamboo with a cooking oil or vegetable cooking spray. Another option is to place a layer of leaves from vegetable greens, such as bok choy or other similar vegetables, to serve as a means to keep the food off the bottom of the basket and to enhance the flavor of the food. The food requiring the longest cooking time is placed in the bottom layer with those requiring less time placed in the top layer. While there are a variety of steamers, there are also a variety of foods that can be cooked by steaming, such as pasteries, breads, soups, rice, vegetables, meats, poultry, and fish. 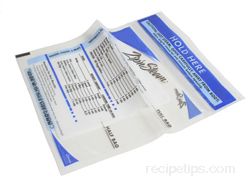 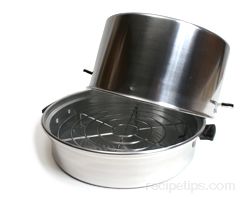