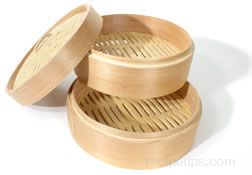 Print
A type of cookware made of bamboo that consists of individual cooking trays or layers with openings in the bottom, that are assembled together and used to cook food with the use of steam. Steamers are made so food is positioned above and not in water that is boiling or hot enough to produce steam to cook foods with a moist hot air. Steaming enables foods to keep their natural flavor, color, shape, and nutritious value better than when boiled or simmered in water. In many instances, it also enhances the texture of the food. Food technicians often consider steaming to be the best way to preserve flavonoids, the compounds found in fruits, vegetables and a few beverages (beer, wine, coffee, tea, and some fruit drinks) that may contribute and provide health benefits for fighting illnesses. Steamed foods can retain the B and C vitamins that are lost with other cooking methods such as braising, baking or boiling.

Bamboo steamers are commonly used for smaller amounts of food and can be placed over wider steel pots with steaming water or they work well over non-stick surfaced, electric woks to steam foods while the wok cooks other ingredients. They are not made to be placed in an oven or a microwave. Bamboo steamers enable the steam to evaporate and circulate easily so it does not accumulate on the lid of the steamer. This type of steamer is generally best for steaming dumplings, buns, breads, or the traditional Chinese dish known as dim sum. When steaming foods made with ingredients that may stick to the surface, it is best to lightly coat the bamboo with a cooking oil or vegetable cooking spray. Another option is to place a layer of leaves from vegetable greens, such as bok choy or other similar vegetables, to serve as a means to keep the food off the bottom of the basket and to enhance the flavor of the food. The food requiring the longest cooking time is placed in the bottom layer with those requiring less time placed in the top layer. While there are a variety of steamers, there are also a variety of foods that can be cooked by steaming, such as pasteries, breads, soups, rice, vegetables, meats, poultry, and fish.