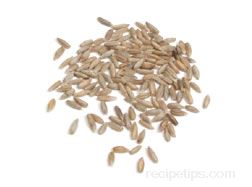 Print
A plant that produces a cereal grain that has a very assertive and hearty flavor with a slightly bitter taste. Rye grows as tall as 8 feet, thrives in cooler climates, and grows well even in poor soil. The color of the grain may range from beige to dark gray.

Rye is processed into a variety of forms including whole kernels (berries), flakes, meal, and flour. When the outer hull is removed, the whole grains can be cooked, although they require longer cooking times than other grains. Soaking the berries overnight will decrease the cooking time. Rye berries are used in stews, rice, and vegetable stir-fries. Rye flakes will cook faster and can be used in a variety of dishes, such as soups and stews. Rye flour is available in varieties ranging from light to dark and textures ranging from course to fine. The type of protein necessary for gluten formation is lower in rye than wheat, but it is higher than in most other grains. Rye flour is often combined with wheat flour when baking yeast breads.

Rye is actually the one of most widely used grains in many of the northern and eastern European countries including much of Scandinavia and Russia, due in part to the cool climate, which is not suitable for growing wheat. Rye is also used in the creation of various alcoholic beverages, such as whiskey and in blends used for some brands of vodka.

Rye is an excellent source of dietary fiber as well as vitamin E, calcium, iron, thiamin, phosphorus, and potassium. The grain should be stored in an airtight container in a cool, dry location. 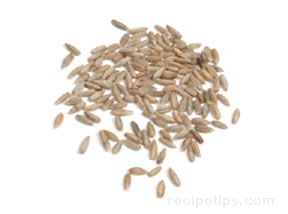