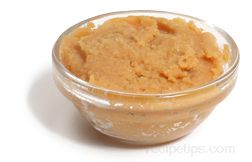 Print
A thick nutritious paste made from a base of steamed and crushed soybeans, barley and/or rice, which are then fermented and aged for as little as a few months or as long as three years. It has the appearance of peanut butter and the smell of soy sauce. Miso is a Japanese staple used to add a rich flavor and creamy texture to soups, stews, vegetables, noodles, salad dressings, sauces, marinades, rubs, and patés. It is most often in a paste form, but is also available as a powder.

To initiate the fermentation process, a grain culture known as koji is applied to the crushed grain as a catalyst. The type of koji used, the ratio of koji to the amount of soybeans added, the length of aging, and the amount of salt added, all affect the flavor, texture and color of the paste. Miso can range in color from a very light golden caramel or yellow to a very dark brown, with the lighter colored miso being aged for shorter periods of time, typically providing a more delicate and sweeter flavor. The lightest colored miso, known as Shiro, and a light caramel-colored miso, often made from rice, provides a sweeter taste and is used in delicate sauces, dressings, creamy soups, fish, poultry, and a variety of lighter foods. The darker colored miso is generally produced from rice or soybeans and may be referred to as Aka or Red miso, Mungi or barley miso, and Hatcho or soy only miso. The dark variety provides a richer, more robust saltier taste and is used to flavor hearty soups, stews, grains, legumes, gravies, sauces, or marinades. A sweet miso, referred to as natto miso, is also available, which has a chutney flavor and is used to complement or flavor a variety of foods.

When using miso to season foods, add it after the food has finished cooking, mixing it in sparingly, since it is highly concentrated. To maintain the flavor and retain the nutrients of miso, be cautious not to over cook or boil it. Miso can be used not only as a complement to foods, but also as a good substitute for soy sauce or salt. 1 tsp of miso = 1 tsp of soy sauce. It makes a nutritious cup of broth (1 tbsp to 1 cup of hot water) or a tasty soup stock (1/4 cup miso to 1 qt. water). Low-salt miso is available as an alternative to the varieties containing higher or concentrations of salt. Miso should be refrigerated and can be stored for a year or less.